ISTG Meaning and Use Cases in Text & Social App

ISTG is a commonly used slang among the young generation on social media posts, in their chats, or during everyday conversations. When pronouncing the word, it is mostly said in its full form, unlike other slang like ASAP, which is commonly pronounced as they are. But when chatting, people use its acronym more, for example, "ISTG, this song is lit!"

Well, this abbreviation might stand for different expressions or meanings; however, there is the primary meaning that most people (like 99%) refer to when using ISTG.

So, with that said, let's have a look at ISTG meaning and how it is used:

Part 1: What Does ISTG Mean?

ISTG stands for: I Swear to God.

I guess you have heard this expression more often than you remember. I Swear to God is a common phrase that people of different ages and professions use in everyday language. The ISTG expression is a close relative to OMG, which stands for "Oh My God." These two acronyms have dominated social media platforms and our everyday conversation for a year.

It is tough to browse social media for 30 mins and fail to see any of these two acronyms used. Even though OMG is more prevalent regarding social media use than ISTG, they are still some of the most commonly used acronyms. 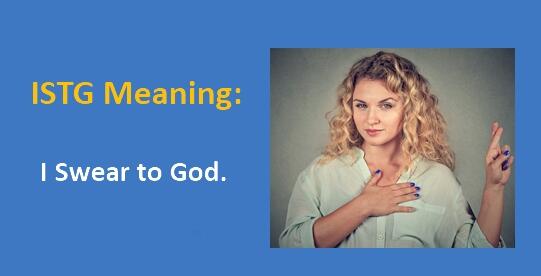 Now let's look at what it means in conversation.

Well, ISTG in social media, chat, or any other place still means the same thing "I Swear To God."

However, when used in conversation, the term might change its inferred meaning slightly, but not too much. It is still a swear word, but when used in different chats, it can infer different meanings.

So, to understand this easily, let's look at how ISTG is used.

Part 2. How ISTG Is Used in Chat or Social Posts

ISTG expresses emotional sincerity; however, it can be used in several ways when conversing with someone or sharing a social media, i.e., Snapchat or Twitter.

The most common ways to use ISTG include the following:

When faced with scepticism, most people use the expression "I swear to God" to express their certainty. It is a point when you feel that someone doesn't believe in you; therefore, you use this word to reassurance that you mean what you are saying. Using ISTG might help convince them that you are telling the truth. 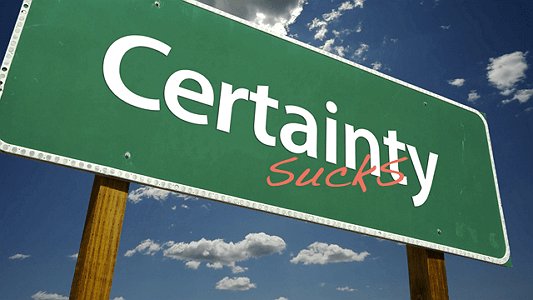 Surprisingly, when you threaten someone, and they show no fear or aren't taking your threat seriously, you tend to use this word to make that threat even more intimidating. For example, if you want someone to stop doing something, you can use ISTG to show that you're serious and you will take action, and they won't like it. 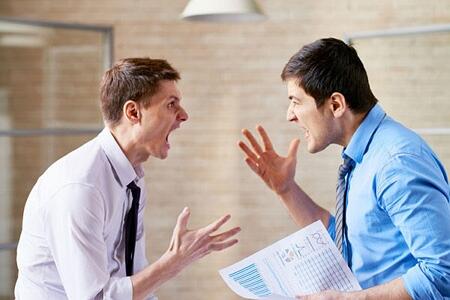 As a Promise to Change

Let's say certain behaviour you exhibited put you in a bad situation. It would be best to reassure someone that you will change to get yourself out of there. So, to show that you are serious and mean your words, you can say, 'I swear to God, I will never do that again.' Doing this will help convince them that your promise is genuine and that you are ready to take action.

As a General Interjection

Just like WTF (what the fuck!) and JFC (Jesus f***ing Christ), ISTG can also be used as an exclamation to express emotions of disbelief. You can use these expressions ad abrupt exclamations in conversations where something goes against your beliefs or expectations.

The expound on these, below are some examples of how ISTG is used:

Part 3. Examples of How ISTG Is Used

To take an oath (a promise to change)

Friend: I feel like I'm being used, and my feelings aren't reciprocated. ISTG, I'm never back to him again.

From this example, you can see that the 'friend' is making a promise or taking an oath that she isn't going back to him again, and she is done.

How it is used to show certainty:

You: Yes way!!! And ISTG, it is tomorrow, they even reminded us today.

This conversation expresses the certainty of the matter at hand. You are simply telling your friend that you are dead serious, that the deadline is tomorrow, and that they should get things done in time.

This example shows how serious the threat is, that if Lizz doesn't stop what's angering Jeff, Jeff will take severe action.

Part 4. When Should You Avoid Using ISTG?

Now that you know how to use this acronym, it is essential that you also know when to avoid using this term. This term isn't ideal to use in every conversation as it might cause the unnecessary issue don't want.

So, avoid using ISTG when:

For provisional use or conversing with someone you respect, there are other ways to sound sincere rather than using this term. Sometimes this term isn't seen as a good term as it might be manipulative to some level, and so in the professional field, try to avoid this phrase.

Additionally, we must take note of the vulgar version of this acronym – the ISTMFG, which refers to "I Swear To Mother F***ing God." This acronym is rare, but be aware of it and avoid using it in such scenarios.

Part 5. How to Discover If Your Kid Is Using the ISTG Slang Word?

Using slang words is a common theme among kids nowadays. It is the safest way to converse without their parents knowing what they are saying or talking about with their friends. As a parent, this behavior isn't good and might lead them the wrong way.

Therefore, how do you track their conversation and know if they are using the ISTG slang word?

Well, one safest and best ways to track your kid's conversations over different platforms while remaining anonymous is by using a parental control app.

There are thousands of parental apps in the market, but the best one we can recommend is the AirDroid Parental Control App.

Below are some of the key reasons why it is the best parental control solution to use:

Why Use the AirDroid Parental Control App?

AirDroid is arguably the best comprehensive parental control app you can get in the market. It is specially designed to help parents protect children in digital life, safeguard offline activities and guide children to build healthy digital habits. You can use this app to track your kid's conversation with friends or strangers and know what content they are consuming more often.

What makes this an ideal messaging tracking tool are:

a) Remote Monitoring: With this app, you don't need to touch your kids' phones to access their messages. Once you pair them to this app, installed on your primary phone, you're all set. With remote control ability, you can utilize the features like screen mirroring and audio and camera access without them noticing.

b) Daily Activity Report: You don't need to spend all day on your phone seeing what your kids are all about on their phones. You can check the daily report at the end of the day and be updated about everything.

c) Sync App Notifications: Get notified in real-time and be updated about everything they get notified about, whether messages or social media notifications.

Overall, ISTG meaning isn't new to most people, but if you didn't know what it means, you now know. As noted, ISTG can express certain emotions in various ways. However, using this term in all your conversations, especially professional ones, isn't advisable.

As a parent, you can keep track of your kid's conversation using the above application. With AirDroid, you can monitor social media apps such as WhatsApp, Twitter, Facebook Messenger, etc. Additionally, you can track their location and manage the app and screen time to ensure healthy digital habits.