A Complete Guide to Cast Apple TV to Chromecast

Apple TV is one of the most popular apps around the world because it has a streaming service through which you can watch a lot of award-winning movies and series. Not a lot of people enjoy such content on small screens of Apple products such as iPhones and iPad. Hence, it is possible that you are looking for a reliable way of casting Apple TV to Chromecast to enjoy it on the larger screen. In this article, you will get to know about the different methods you can use to cast Apple TV to Chromecast, so keep reading!

Part 1: How to Cast Apple TV to Chromecast?

For the older generation of Chromecast users without Google TV:

Let’s discuss the methods of casting Apple TV to Chromecast with and without Google TV:

If you have an older smart TV or you are using Chromecast without Google TV, you cannot install the Apple TV app directly. The good thing is that there is a workaround to make the Apple TV work in such models as well.

Follow these steps to stream Apple TV to Chromecast without Google TV: 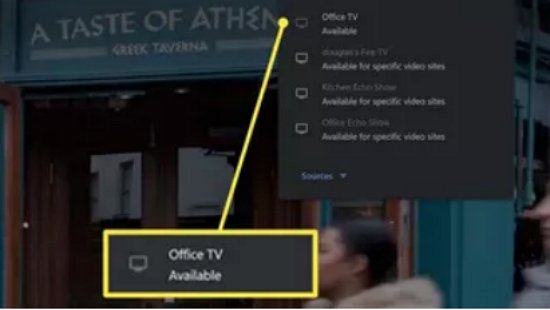 By using these few simple steps, it is possible to cast Apple TV to Chromecast using the built-in Cast function of Chrome users.

For Chromecast with Google TV users:

Google TV is the newer version of Android TV with a better interface and more features. If you have the latest smart TV, it is likely to have Google TV and a built-in Chromecast. In such a situation, you won't have to worry about following any extensive steps to stream Apple TV on Chromecast.

Instead, you can easily do it by directly downloading the Apple TV app directly and watching your favourite movies and series.

How to Install Apple TV for Google Chromecast with Google TV？ Part 2: Bonus - How to Cast Apple TV from iPhone to Smart TV?

Another way of enjoying Apple TV on the larger screen of your smart TV is by using a third-party casting tool like AirDroid Cast.

AirDroid Cast is a reliable and user-friendly screencasting tool that you can use to cast Apple TV from iPhone to Smart TV. It is one of the best third-party screen mirroring tools to use to fulfill all of your casting-related requirements.

The good thing about using AirDroid Cast is that you won't have to worry about the version of your Smart TV. You can use it on all types of smart TVs that have a web browser in them.Steps to Cast Apple TV from iPhone to Smart TV

Follow these steps to screen mirror your Apple TV from iPhone to Smart TV using the web version of AirDroid Cast:

Using AirDroid Cast instead of going through the extensive steps of Chromecast and Google TV is highly beneficial in saving a lot of time. Cross-platform support of AirDroid Cast means you can fulfill all of your screen mirroring requirements through the same platform.

Chromecast and other screen mirroring apps can run into significant compatibility issues. For instance, when you want to cast Apple TV to Chromecast, you will have to determine whether you have a Google TV or not. However, no such compatibility issues are involved in AirDroid Cast.

The quality of the audio and video is one of the most important factors to consider when you are mirroring a streaming app like Apple TV. AirDroid Cast ensures high-quality video and synchronized audio, so you will enjoy the entire streaming experience.

AirDroid Cast ensures maximum security with the help of a unique casting code so that you don’t have to worry about any security issues.

AirDroid Cast is quite easy to use on all platforms, including when you are mirroring Apple TV from iPhone to Smart TV.

AirDroid Cast is a powerful screen mirroring tool that you can use for many other functions other than mirroring Apple TV. You can use it to hold different meetings, play games, view pictures on the larger screen of your TV, and other such purposes.

Apple TV+ is one of the most popular streaming services around the world. The massive popularity of Apple TV+ is mainly led by acclaimed series like Severance, Ted Lasso, and The Morning Show. It was launched in 2019 and quickly became a leading name in the streaming industry when celebrities like Oprah Winfrey and Steven Spielberg got associated with it. Apple TV+ is quite affordable, especially when you compare it with the cost of various other streaming services. You can get a 7-day trial, after which you will have to pay $6.99 per month and get access to the various series and movies of Apple TV+. People who buy Apple devices such as Apple TV 4K or iPad are also eligible for free Apple TV+ access for three months.

A lot of original content has been produced by Apple, and it plans to keep expanding its Apple TV+ catalog. Therefore, if you want to fully enjoy the content from Apple, you will find the process of mirroring Apple TV to Chromecast highly useful as it allows you to see the content on larger screens.

The bottom line is that a number of factors have to be considered while mirroring Apple TV to your Chromecast. The very thing you have to do is determine the model of your Smart TV to know whether it is a simple Android TV or Google TV.

The best solution to mirror Apple TV to your TV is to use a third-party screen mirroring tool like AirDroid Cast so that you won't have to worry about compatibility and version issues. You can use it for all types of Smart TVs that have a web browser.

Why won't Apple TV be cast to Chromecast?

Elsa
Yes, you can share your Apple TV+ with up to six family members or friends. It is possible to create six different profiles in the same account so that every family or friend can get access to customized content preferences. The admin of the account can join other members to join the account.
What are the best Apple TV Plus shows?

Elsa
Apple is one of the most profitable organizations, especially due to its massive sale of hardware. Currently, a lot of names are still emerging in the streaming industry, but it is already a competitive sector due the platforms like Disney+ and Netflix. Therefore, the primary focus of Apple TV+ is on gaining as many subscribers as possible, due to which it is cost-effective for the time being.
Was This Page Helpful?