The simplest yet most effective tool to cast Android to your computer without root is by using AirDroid Cast, it allows you to cast Android & iOS device screens to a computer wirelessly, and even directly control mobile device on PC/Mac.

Although Android smartphones have allowed users to access their favorite movies online, these devices can’t replicate the viewer experience offered by big screens like PC/Mac monitors. Cast Android Screen to PC/Mac to enjoy the larger screen viewer experience has been a long-standing ambition. Technology has now enabled us to cast smartphone screens on other devices like PC/Mac or TV. To learn more about how to cast Android to PC/Mac simply, keep reading the article.

Part 1: What is Screen Casting, Screen Mirroring and Screen Sharing?

Screen casting is a process like you cast a video to another larger screen and still use your device without interrupting the video or showing other content. On the other hand, screen mirroring converts both devices into mirrors and displays exactly the same content on their screens simultaneously. Screen sharing is fundamentally equivalent to screen reflecting, with the exception of it referring to mirroring your screen on someone else's monitors in a different location. Overall, both methods offer a cinematic experience by displaying content on the larger screen.

Part 2: How to Cast Android to PC/Mac without Root via USB?

Now technology allows us to see the Android phone's screen on a PC without root. The simplest yet most effective tool to cast Android to your computer without root is by using AirDroid Cast, which shared your Android screen to a PC via USB. You don't need to install any App on your Android phone. Cast device's screen via USB Cable has excellent connection stability and is not affected by any network fluctuations.

Here's What You Need to Cast Android to PC without Root via USB:

Step 3.Connect Android to PC via a USB Cable
Now, connect your Android phone to your PC via a USB cable. Tap Cable and select your device from the available options. Wait for a few seconds until the Android is connected to your computer. Once connected, the Android screen will display on your computer screen. Step 4.Allow USB Debugging
You may receive a pop-up on phone asking your confirmation whether you trust this computer or not. When you receive this pop-up, tap OK on your Android to keep screen casting. Once connected successfully, the Android device's screen will display on the computer. Note : Sometimes, screen casting with AirDroid Cast fails because USB debugging needs to be enabled. To do this:

Given below are the best screen mirroring apps to cast Android to Windows 10 or earlier versions of Microsoft or MacOS monitor:

Take a quick galance of the comparison of 5 mirroring ways:

AirDroid Cast is a user-friendly screen casting app that allows its users to share their device screens to a large display. The app is compatible with Android, iOS, Windows, and Mac and gives direct control of smartphones on a computer.

Here you can check the video tutorial: How to screen mirroring Android to PC

Connect App works on Windows and allows users to connect their smartphone devices with Windows computers.

LetsView is another easy-to-use screen mirroring app that works on Windows, Mac, Android, iOS, and TV. 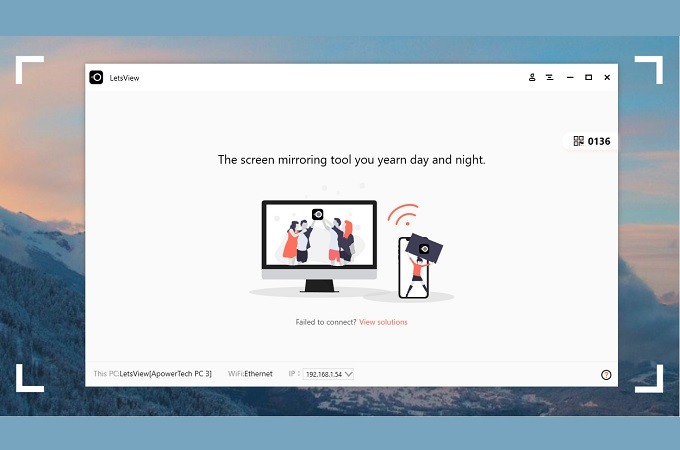 Mobizen is a convenient screen mirroring and recording app compatible with Android and Huawei smartphones. Powered with advanced features, Mobizen has won The Google Play Best App of 2016 Award and is used by over 200 million YouTubers globally. Vysor allows users to connect their Android or iPhone to desktop and cast screens. The app is compatible with all major operating systems including Chrome, Windows, iOS, and Android. Here are some best approaches to cast Android to PC/Mac. You can take advantage of all of these options by going online. You may enjoy watching TikTok videos, playing Android games, and browsing documents or media on a larger screen by following a few simple steps. And Android screen share to PC/Mac is not difficult with AirDroid Cast. If you want to get it done, this article is right here for you.

FAQs about Cast Android to PC/Mac

Yes, if you are using Windows 10 and the host device supports Miracast, you can cast Android screens to the computer with the default Connect Application. You can also try AirDroid Cast or Vysor for this purpose. All these apps work fine on both Android and Windows.