If you are finding a way to screen mirroring your phone/computer screen to Android TV, AirDroid Cast Web can help you for this, let’s check!

3 Easy Ways to Get Apple Airplay to Android TV

My father gave me an Android TV for my room, even though I'm an iOS user. It is the first time I have used Android TV instead of AirPlay to stream movies to my Apple TV. I have tried numerous times, all in vain, to get my iPhone to work with my Android TV.

As a result of my research, I've come up with a solution to my issue that I'd like to pass along to others. To put it simply, AirPlay is a wireless communication protocol that enables the transmission of audio, video, and still images from one device to another. I will show you the best AirPlay Android TV methods in this article. Usually, Android TV does not support AirPlay, but LG, Sony, Samsung, and some other companies launched some advanced TVs capable of Android TV supporting AirPlay.

All those TVs will have a mark as "Works with Apple AirPlay." Only these TV models have the AirPlay supporting features. The direct streaming feature is the same as you can get on Apple TV. You can also use the Apple TV console to AirPlay Android TV.

Connect your Android TV with an Apple TV console Box and make sure both the devices are connected with the same Wi-Fi. It just takes 3 to 5 minutes to complete the process.

Tap on the share icon and get the AirPlay mode.

From the list of available devices, select the Android TV you want to AirPlay.

It will share your mobile screen directly on the TV.

Android TV can support AirPlay using three different methods. As it is evident that Apple TV supports AirPlay but not Android TV, you can still screen mirroring on Android TV using Google third-party apps, Chromecast and by AirPlay receiver. Let's cover these three methods in detail.

AirDroid Cast Web is the latest technology that supports Android, iOS, Windows, Mac, and Smart TV, and the screen is cast within a minute. It requires no cables and installation at the receiver end.

Only you have to download the App on the sender's device. Only one to two minutes are required to create the connection. You only need the internet connection and two devices between which you will make a connection.

Open a web browser on your Android TV and go to webcast.airdroid.com. When you arrive this website, you can see a QR code/Cast Code shown here.

Launch AirDroid Cast on your phone/computer.

If you want to mirror your computer screen, click the WLAN option and select "Share this computer screen". Enter the cast code in the box to start mirroring. This is an easy and effective way to stream media from your phone or tablet to an Android TV. 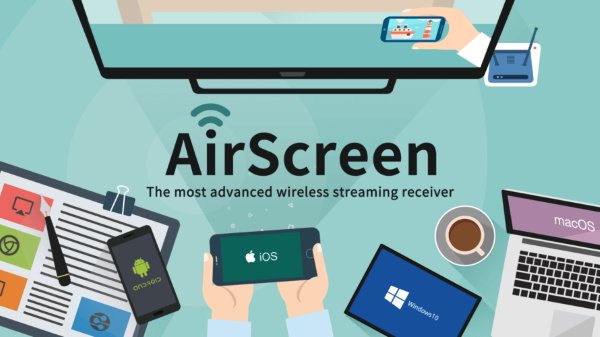 Cast media from one Android device to another or a TV to a big screen is made simple with AirScreen. You can stream your favorite shows if you have a TV connected to your Android device.

AirScreen allows users to fine-tune their device's playback settings to get the best possible experience. It is an excellent alternative to the Chromecast if you want to save money and time. It may take 3 to 5 minutes to download the App and then cast the screen.

Android's AirPlayMirror app is a receiver for Apple's AirPlay mirroring and casting. You can use an Apple device on the following devices: a Macbook, an iMac, an iPhone or iPad, or an iPod Touch.

Android devices can mirror an Apple device's screen, playback audio or videos from the device, or play a YouTube video link over the local network when using AirPlayMirror Receiver.

Useful for family, friends, colleagues, customers, or business partners to see and access the content on an Apple device's screen. This App also takes time to download depending upon your internet speed. It usually takes three to four minutes for the screen mirroring process.

It involves a few simple steps to screen mirror. Launch the App on an Android device, open the AirPlay mode on the iOS device, and then select your desired device to show the output.

AirBeam TV is also one of the best Airplay app for Android TV. It provides quality results for watching your favorite movies, apps, and videos on a big screen without delay. AirBeamTV App allows you to share the screen to your iPhone, Mac, or iPad on the Smart TV wirelessly.

It provides both the free version and the premium package to enjoy screen sharing. It also enables you cast the presentations of your office, video sharing, and video meetings using this app. All popular Smart TV brands are compatible with the App, which works as a mirror on the TV. You don't need an Apple TV or AirPlay to stream your Mac to your TV with AirBeamTV.

Installation and mirroring may take four to five minutes. Additionally, no additional hardware is required. Using AirBeamTV, you don't need an Apple TV or AirPlay to enjoy your favorite shows and movies.

Make use of the App; take a look at your gadget. After that, begin the process of mirroring. The screen of your mobile device will immediately appear on the television.

ApowerMirror is an iOS and Android screen mirroring App. Screen mirroring with audio is possible with this device, which uses the most popular mirroring technology today.

To cast their phone's screen directly to the TV, users can use ApowerMirror's screen mirroring and casting features. ApowerMirror lets you mirror up to four devices at once. Without a cable, users can connect their iPhone/Android to Android TV. Users can also play mobile games on their Android and TV with this screen mirroring app. ApowerMirror ensures user-friendly interface and a lot of features to support the users for best mirroring.

Google Chromecast is another simple way to cast your iPhone screen to Android TV. It is a device that helps you in screen mirroring. You can use AirPlay from Android to Apple TV also. You only need a Chromecast device to connect your Android TV and a mobile device. It would be best if you connected both the devices with the same Wi-Fi. Chromecast has an HDMI cable to connect to the TV in its HDMI port.

Here is the detailed description of how to do this using Chromecast:

Connect your mobile device with the same Wi-Fi with which you connect the TV.

Open any video streaming App to get the content you want to watch. In that streaming App, find the Cast option and tap on it.

Select the TV by choosing its name from the list of available devices.

When the cast option changes its color, it means that you are now able to share the screen.

AirPlay receiver is another way to AirPlay on Android TV. This method is straightforward, and you can get the AirPlay receiver of various models and prices very quickly from online markets like Amazon and Walmart.

AirPlay receivers are the best for audio quality. You can also make settings according to your requirements. Most high-quality AirPlay receivers support up to 4K and can be connected using Wi-Fi and Bluetooth. It also requires an HDMI port for creating the connection.

We recommend AirDroid Cast Web as it is the most powerful web application for screen mirroring. It is always the priority of professionals to use the best App that benefits you in various ways. So, let's discuss some benefits of this tool.

AirDroid Cast Web allows cross-platform screen sharing, which is why it is also referred to as AirPlay from Android to Apple TV. You can cast screens from Android and iOS devices to Windows, Mac, and even Smart TV. Too much flexibility makes it easier for the users to use it in all situations they need.

Cast to Any Browser

You can cast the screen to any browser. Open the link on any browser you use and select the medium for connection. After that, allow the permission to start casting. It takes only a minute or two to create the whole setup.

No Installation is required on the Receiving Device

4 Extra Tips: How to Set up Airplay on Your Android TV Box?

Mirroring your iPhone to an Android TV box is easy. You can play games, browse the web, and binge-watch on a larger screen.

In this article, we discussed AirPlay and its usage. AirPlay is used to stream videos from iPhone, iPad or Mac screens to Apple TV. But there are some situations where we need to AirPlay on Android TV. For this purpose, we have found the 7 best solutions. You can use Chromecast or any third-party app. AirDroid Cast web verson is the best tool among all the methods mentioned above as it is fast and secure. Screen mirroring is done within a minute, making it super-fast in understanding and user-friendly. Unlike other apps, it also supports cross-platform screen sharing.