[2022 Guide]How to Cast from iPhone to Apple TV/Android TV?

Screen-casting is a process of casting one screen to another screen, such as from an iPhone operation to other devices. Normally, it involves mirroring the screen of your smartphone or a smaller device to a bigger screen such as a Mac, PC, or TV. 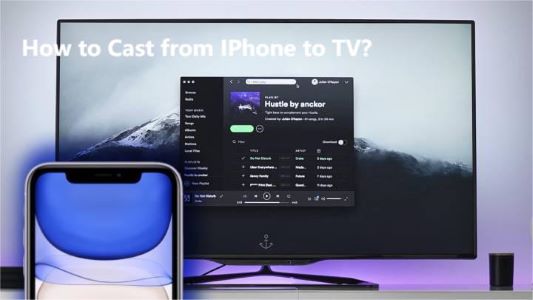 1 How to Cast iPhone Screen to ANY Smart TV?

You are likely to face a lot of compatibility-related issues in screen mirroring when you are dealing with specific tools and features such as AirPlay and Roku Stick.

The smart thing to do is use a reliable screen mirroring app like AirDroid Cast that provides comprehensive support for all types of devices, including iPhone, MacBook, TV, Windows, and Android.

You don't need any external device to mirror your iPhone to an Android TV or Apple TV. Moreover, you also won't have to go through different tutorials on how to cast iPhone to Vizio TV or any of the smart TV you might have.

All you need is a web browser-enabled smart TV to start screencasting your iPhone. AirDroid Cast is compatible with both Android and Apple devices which extends its compatibility to a great extent.

By using the AirDroid Cast Web, you can save time by not downloading any app on your TV as long as the browser is working. Moreover, you can benefit from cross-platform screen sharing and easy setup. It is also significantly faster than many other screencasting apps and platforms.

Follow these steps to screen mirror your iPhone to any Smart TV with AirDroid Cast: 2 How to Cast iPhone Screen to Apple TV?

Casting your iPhone screen to an Apple TV is not a major issue since both these devices belong to the same brand. You can use the built-in AirPlay function to do it.

This includes iTunes right-protected media, Netflix, and YouTube. The iPhone operating system 14 allows users to airplay 4K video from mobile media to TV. Airplay acts like a Google cast. You can cast your iPhone media, smart speaker, and Spotify to play on Chrome cast.

Follow these steps to cast the iPhone screen to Apple TV:

There can be certain Apple TV or older iOS devices in which AirPlay does not work. In such situations, you should use a third-party tool to connect the iPhone screen to the Android TV. Following is the comprehensive list of AirPlay 2-enabled TVs and devices.

3 How to Cast iPhone to TV without AirPlay?

Cast from iPhone to TV with Chromecast

Chromecast is a streaming device. It helps in connecting to cast iPhone to TV without Apple TV. It connects to your iPhone. Tablets, or computers with large smart TV through a Wireless network.

You can connect to play your mobile phone digital media to your monitor or TV with an HDMI port. HDMI port is a high-definition multimedia interface transmitting digital video and audio cast to your smart TV or projector through a cable. When you are using chrome cast to play digital media on a smart TV, you can stream video from online connections like YouTube, Netflix, Hulu, and other servers streaming online content. Here are the steps to connect your iPhone to TV

Steps:
Extend Reading: How to Cast Android Screen to TV without Chromecast?

Cast from iPhone to TV with A Lightning Digital AV Adapter Cast from iPhone to TV with third-Party App

ApowerMirror is a screen Mirroring app. It is the easy and simple user experience software to enable you to cast iPhone to Android or Apple screen TV. It is supporting Android, iOS devices, MAC, and Windows for a better experience. 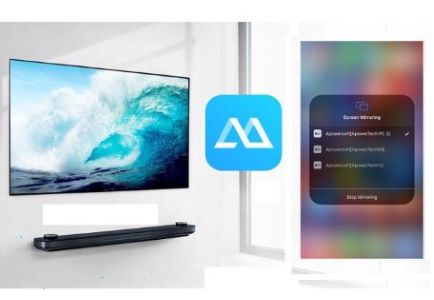 4 Which is the Best Way to Cast iPhone to Android TV?

Many people want to learn how to cast iPhone to Samsung TV, but they are not able to find the best option. You should use the Samsung SmartThings App.

The Samsung SmartThings app is an app installed in Samsung Android TV that enables to screencast from Android, Windows, and iPhone to Samsung smart screen. You can cast to LG TV from your iPhone follow the steps below.

You can cast iPhone to Roku TV by using software compatible and installed on both devices. Replica mirror for Chrome cast enables Roku TV to cast from iPhone both connecting the same network. Go to Settings > System > Screen mirroring and select prompt or always allow to cast content from your iPhone to your Roku. You can cast your iPhone to Apple TV. 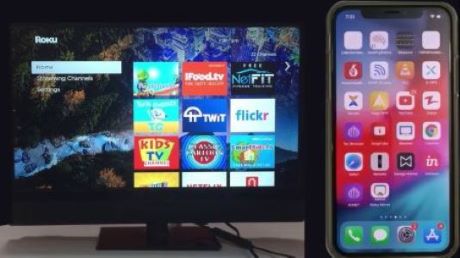 The Vizio Smart Cast app is the available Apple app store. Installed in your iPhone then you can cast your iPhone to Vizio TV if both networks have the same connection. When the app finds your Vizio TV, select it, then tap Pair on the Bluetooth Pairing Request pop-up.

It is easy to mirror the iPhone screen to LG TV with the help of the LG TV Mirroring + Cast. It involves following a few simple steps:

5 Bonus Tip- Can I Cast iPhone to PC or Mac?

1Cast from iPhone to TV with AirDroid Cast

With AirDroid Cast, you can cast your screen from an associate AirPlay-compatible device like an iPhone, or iPad. Your Windows laptop maybe was an associate in Nursing AirPlay receiver so that you'll play videos, movies, or games on an even bigger screen.

Also, you can use this app to stream your device to PC/Mac via Wi-fi or USB, and then you can control all of your devices from your desktop without the need for any dedicated remote app. Initiate the cast request just two steps :

This AirDroid Cast casts phone or tablet defenses to your PC or Mac screen inconspicuously over your third-party network, with no redundant tackle required.

The aforementioned casting and screen mirroring methods from iPhone to TV are trusted and popular. Generally, you should go for a tool that works on all major platforms to fulfill your screen mirroring requirements.

If you are really looking for how to cast iPhone to other devices, AirDroid Cast can help you without needing any bulky cords or expensive hardware. It is time to say goodbye to the lines that clog your entertainment space and use the efficient AirDroid Cast app to quickly mirror your devices to other screens.

How Do I Cast iPhone and iPad on Mac at the Same Time?

Elsa
The Apple peer-to-peer feature enables to cast from iPhone to TV. You can use this feature when you want to screen share without a Wi-Fi connection.
Why Is My Airplay Not Working?

Elsa
It's essential to keep your Apple bias streamlined to help fix generally known bugs or introduce precious features to your device.
Was This Page Helpful?