If you've updated your iPhone to iOS 15 and found some issues with using the latest version of iOS, you're not alone. Some common problems with iOS 15 AirPlay not working include audio or video stuttering, glitches in screen mirroring or it keeps disconnecting, and low-quality audio or video. 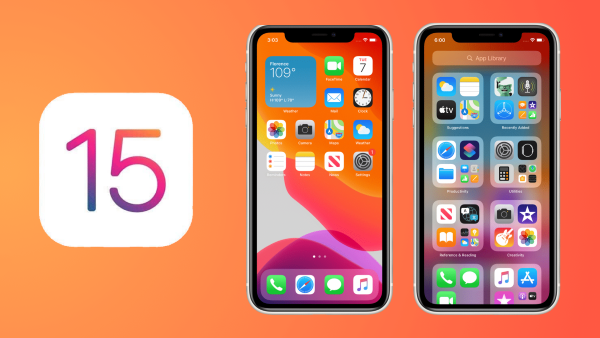 Before you start troubleshooting, make sure your iPhone and AirPlay devices are connected to the same Wi-Fi network. In this article, you will get to know some common iOS 15 problems and how to fix them easily.

1 Common Issues of iOS 15 AirPlay Not Working & How to Fix?

Here are some common issues of iOS AirPlay not working and their easy fixes.

In many cases, AirPlay mirroring problems occur when the software is updated. Airplay keeps lagging and freezing. It shows glitches, the video or audio stutters and displays on low quality. In that case, restarting the device, and turning On-Off wifi and Bluetooth may resolve these issues.

Also, you can try to restart the network setting to wipe up all these issues that occur during screen mirroring. To do this: If you've ever wondered why you can't seem to swipe up from the bottom of your device to access Control Center and use Screen Mirroring when you're in an app, it's probably because you've mistakenly turned off the "Access Within Apps" option. To fix this: 3. Video Has No Sound

One issue you might run into with AirPlay is that the sound of your video might be missing. To fix this, first, check that the sound on both your connected device and your iOS device is turned on.

If it's working properly, the issue might be that the app or web page you're trying to cast isn't fully AirPlay compatible. To fix this, ensure AirPlay is enabled and that the volume or ringer is turned up on both devices.>

Finally, open an app and play a song or video, turn up the volume, and try playing the video again.

When an iOS device is connected to a network, the AirPlay icon will show up in the menu bar by default. If the icon is not visible in the menu, it may have been disabled in the settings.

To enable the AirPlay icon, go to the Apple logo in the top left corner and select “System Preferences”. Then, select the ‘Display’ tab and enable the "Show mirroring options in the menu bar when available" option.

Finally, check to see if AirPlay Display mode is enabled.

In the majority of cases, simply rebooting the devices and making sure they're all still on the same network will fix things. However, there are occasions when the router itself is the issue. If you've attempted everything and there's still no change, please reboot the router.

Many routers have an on and off switch on the back, but if yours doesn't, you can reset it by unplugging it from the outlet, waiting a few seconds, and then plugging it back in.

Just be aware that it'll take a few minutes for the router to start up again and reconnect to the internet.

2 Solved: Problems That You May Encounter

In this section, we will discuss a few problems that you may have encountered during screen mirroring to different platforms.

If you're trying to AirPlay mirror your iOS device to your Apple TV but you keep seeing the "Looking for Apple TV…" error, it might be because your Apple TV is in sleep mode.

To solve this, you need to wake up your Apple TV first and turn on the Ethernet using the remote control. Once you do that, you should be able to see your Apple TV and mirror your device without any issues. If AirPlay to TV not working, make sure that both your Apple TV and iOS device are on the same Wi-Fi network. The Wi-Fi network should be strong and stable for optimal mirroring.

Also, check that the software on both your Apple TV and iOS device is up to date. If those troubleshooting steps don't work, try restarting your iOS device or Apple TV. Besides these, make sure that the AirPlay is turned on.

If your iOS 15 Screen Mirroring Not Working on Mac and PC, you may refer to the following guidelines.

One of the potential reasons that might cause iOS 15 not to screen mirror to Mac is outdated mac OS software. You can usually solve this problem by updating the software immediately.

However, if the issue is with your Firewall, then that would be a more serious reason why your Mac is unable to receive iOS screen mirroring contents. Here is how to fix it:

In order to view the contents of your iPhone or iPad on a Windows computer, you need to download an AirPlay receiver, such as the Airdroid Cast app or 5KPlayer.

Once the screen mirroring app is installed, you'll be able to see your iOS 15 device's screen on your computer.

As already mentioned above, Windows PCs do not support in-built AirPlay screen mirroring. Some third-party application is needed to work as an AirPlay receiver for Windows computers. Airdroid Cast is one such application that works amazingly.

Download AirDroid Cast on both your iPhone/iPad and Windows PC by clicking download button below. You can also install it from App Store.

How to use AirDroid Cast to AirPlay iPhone screen to Windows PC?

Here is how to screen mirror iOS 15 running device to Windwos PC. 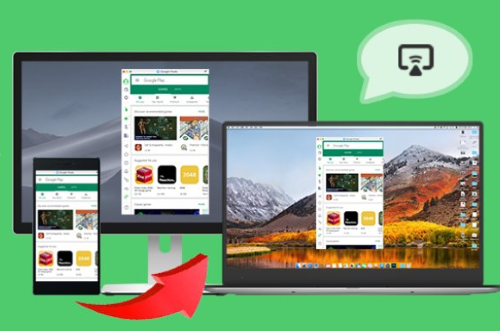 When you finish installtion. Launch Airdroid Cast on your both devices, it offers three connection methods for you.

This option supports local & remote connection. Whether your two devices are under the same place or not, you can scan a QR code or cast by using the "Cast code” sent to you by AirDroid after initiating the cast request for screen mirroring. You can wirelessly connect any device to your Windows computer from any AirPlay-compatible device such as an iPad, iPhone, or even a Mac. It turns your Windows PC into an AirPlay Receiver. You can use a USB cable to commence screen mirroring between two devices. A USB cable will eliminate delays in real-time transmission. 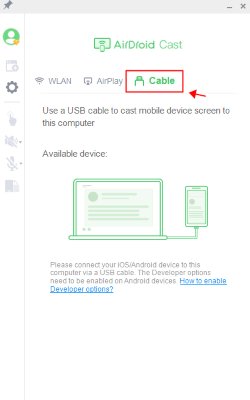 Airdroid Cast is a cross-platform wireless screen-sharing tool that is quick and efficient. It can be used to cast remotely without the need for both devices to be on the same network.

It can be used as the screen receiver on any mobile phone, tablet, computer, or smart TV, regardless of the operating system.

Cast to the Browser

AirDroid Cast web version helps you to save time and effort by casting any device to the Browser. By visiting webcast.airdroid.com, you can cast online without any installation on the receiving screen. Use Microphone and Speaker of Your Phone

Airdroid Cast offers a two-way audio system. It means that you can use your iPhone's microphone and speaker while screen mirroring. This is great for remote meetings, as attendees can communicate directly with one another using two-way audio. This greatly enhances communication efficiency. If you have followed all of the above-mentioned tips for improving your AirPlay and still iOS 15 screens mirroring not working, then you may contact Apple for support. You can either call the support phone number for your country, or you can get personalized access to solutions through the Apple support app. 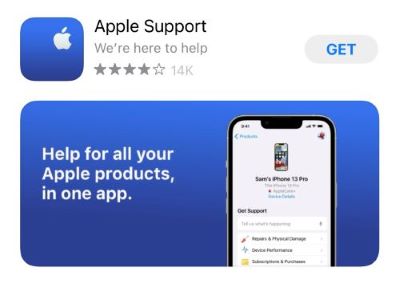 5 Other Issues While Using AirPlay

If you have any other issues while using AirPlay, here is how to fix them.

If the music stops unexpectedly

If your music stops playing unexpectedly, you can use your device to play music again. Sometimes, the Home app might be using your Apple TV, or AirPlay-compatible speaker for streaming music.

However, performing another task or using Siri might stop playback everywhere. To prevent this from happening, you can use your computer or an iOS device with iTunes as an audio source to stream music.

If you see a video, but can't hear the sound

If you're having trouble hearing audio when streaming video from your iOS device to your computer, double check that the volume is turned up on both your device and the receiving end.

Also, check the Ring or Silent switch. If the switch is set to silent, you'll see an orange line. Toggle the switch to turn on the ringer.

6 Check: Requirements to Use iOS 15 AirPlay

Streaming and displaying content from your iOS 15 iPhone or iPad on a bigger screen is possible with AirPlay mirroring, but there are some requirements that you'll need to check first.

Both devices must support the Apple AirPlay protocol, and they should have the latest iOS 15 software update. Be sure your iOS 15 device is close to the device you're trying to screen mirror to, and check that all devices are connected to the same Wi-Fi network.

Here are some of the AirPlay 2 Compatible Streaming Devices:

Upgrading to a new iOS version, such as 15, can bring both new features and defects. To avoid any potential problems, it's always recommended to review the updates before applying them to your device. In the above article, we briefly covered some of the issues you may face when mirroring after the update, as well as provided solutions to mitigate them. I hope you will refer back to this article in case you face any such problem. However, no matter what iOS version you use, remember that you can do screen mirror without any troubles through AirDroid Cast app.

What Can I Do To Prevent AirPlay Not Working in The Future?

Elsa
To prevent the AirPlay from not working issues in the future, double check that the device and app you're using both support AirPlay. Make sure your Wi-Fi is turned on and that all cables are plugged in correctly. If problems persist, try playing around with the resolution. This article can be a helpful resource if you run into any other AirPlay-related issues in the future.
What is the Procedure for iOS Screen Mirroring?

Elsa
For iOS screen mirroring, connect both devices to the same Wi-Fi network. Open “Control Center” and tap “Screen Mirroring”. Now select your desired device from the list for screen mirroring.
Why Does AirPlay Not Work On Both My iPhone and iPad?

Elsa
If you're having trouble using AirPlay on your iPhone and iPad, make sure that your AirPlay-compatible devices are turned on and close to each other. Then, check that the devices are updated to the latest software and are connected to the same Wi-Fi network. Finally, restart the devices that you want to use with AirPlay or screen mirroring.
Why Isn't AirPlay Showing on My Mac?

Elsa
The foremost reason AirPlay is not showing on Mac is the problem with your display settings or Wi-Fi connection. To fix this, restart your Wi-Fi and go to System Preferences, and open Display. Then, activate the "Show mirroring options in the menu bar when available".
How to Turn on AirPlay on iOS 15?

Elsa
To turn on AirPlay, visit “Control Center” and tap “Screen mirroring”. Select your AirPlay-compatible device. If an AirPlay passcode appears on another screen, enter the passcode on your iPhone.
How Do You Reset AirPlay on iPhone?

Elsa
If you want to reset your AirPlay settings on your iPhone or iPad, go to 'Settings' and then open 'General'. Scroll down to 'Reset' and tap on 'Reset Network Settings.
How Do I Fix My AirPlay Setting?

Elsa
To fix the AirPlay setting, go to "Settings and tap 'AirPlay' to turn it on. Now check Wi-Fi on your iPhone/iPad and ensure that the Wi-Fi network is the same on both devices. In "General" you can scroll down and reset the AirPlay setting.
Was This Page Helpful?