Last night I was reading a piece of writing about AirPlay, and in the comment section I saw a lot of people discussing the AirPlay working issues.

According to them, AirPlay is only streaming voice, and video is missing on their devices. All the people were looking for a solution for this black screen issue of AirPlay. But I have an answer to their question because I faced the same thing a few times ago. Luckily, I fixed this AirPlay with no video streaming, only an audio issue. In this article, I'm going to guide you on how you can fix AirPlay not showing video issues.

There could be different reasons if AirPlay is not showing video and just audio is streaming with a black screen. I found some common reasons, such as if you enable only the audio playback option instead of AirPlay.

Additional AirPlay fails to show video when your connected devices are far away, and doesn't work properly. These are some common issues that can be resolved in a short time.

The first thing is to keep your connected devices at a shorter distance at which works well and always turn on your AirPlay option.

If your AirPlay only playing audio not showing video on your Apple TV. If you own a Samsung TV and AirPlay and it is not working well, update your mobile and Samsung TV or turn off the code. AirDroid Cast is a famous screen mirroring software. It is the best alternative to AirPlay because many people face issues in video and audio streaming via AirPlay. But this application is simple and easy to use.

The screen mirroring with AirDroid Cast doesn't need any extra effort. It easily shares the screen in a few seconds. The best thing about AirDroid Cast is that it helps you in casting screen and audio at the same time without any delay.

How to Set Up AirDroid Cast?

If you are an iOS device user and want to do screen mirroring via AirDroid Cast, you have three different options for casting screens.

Note : First you need to download this app onto your iPhone and PC.
Try It Free

Connect both devices with the same WiFi connection, Then go to Windows PC or Mac, tap on the WLAN option. 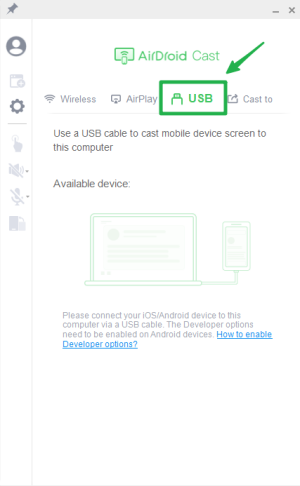 What Can AirDroid Cast Do?

AirDroid Cast is an amazing software that can do a lot of things without charging you extra such as:

By using this feature, you can listen to the sound of the shared screen, video, etc. Along with this, the user can use the microphone of the device and can convey his message and discuss things with other members. It is the perfect software if you want to enjoy two-way audio during meetings and presentations.

AirDroid Cast supports screen sharing across all platforms. It turns all tablets, computers, and smart TVs into a screen and audio receiver.

The web version of AirDroid Cast made the screen mirroring easy. Because of it, you don't require the installation of an AirDroid Cast. You can cast the screen on any browser anytime.

The thing people mostly like about AirDroid Cast is it allows you remote connection. So you can mirror your screen anytime, anywhere, without using any dongle or USB cable.

With AirDroid Cast, you can mirror screen and watch shared content in full-screen mode. You can easily watch and read things on full screen. Additionally, you can rotate the screen according to your choice.

4 Tips: AirPlay Not Working - How to Fix?

Here are a few tips for you to fix it:

AirPlay does not support all devices. If AirPlay is not working, you should first check whether it works for your device or not.

Here is a list published about which devices you can use AirPlay on:

Sometimes the AirPlay does not work properly because of the wrong setting of the AirPlay receiver device. You can adjust AirPlay settings by following these mentioned steps.

Update the software of all devices

If your devices do not have up-to-date software, it causes an issue during AirPlay. That's why update the software of both devices before starting AirPlay streaming.

It plays an important role in the AirPlay process; if both your devices are not connected to the same WiFi network, you can AirPlay anything. So if AirPlay is not working, check your WiFi connection to check what network you are using, follow these easy steps:

Keep your devices turned on

AirPlay does not work properly if your devices are in sleeping mode. So keep both your devices turned on all the time if you want to AirPlay. You can press any button after every 5 seconds to keep your devices on. Additionally, you can change your sleeping mode time.

According to experts, AirPlay may not work properly if both devices are far from each other. So keep both your devices in a 33 feet area to avoid any problems.

Turn on the AirPlay indicator in the status bar

When your device detects the AirPlay device on the network, the AirPlay icon will appear in the menu bar. If you are unable to see the icon, you have to turn it off.

Here are some easy steps for you:

When Airplane mode stays on, it does not allow the functioning of AirPlay devices. That's why keep your airplane mode turned off.

Turn off automatic AirPlay to TVs

Auomatic AirPlay connection to TVs causes problems in AirPlay sometimes. That is why keep your automatic connection turned off.

Screen mirroring is a useful feature that helps to share content from one device to another, but sometimes, AirPlay does not work properly. There are various ways to resolve AirPlay video and audio sharing issues, but we face the same issue after some time. Therefore a permanent screen solution is needed. AirDroid Cast is a tool that supports audio and video sharing without any complications. if your Apple TV only playing audio, So get rid of old screen mirroring methods and try AirDroid Cast.