How to Watch Disney Plus on TV?

During those long hours spent cooped up inside, streaming services were more than a welcome reprieve. Even now, as the world returns to normal, they continue to be an important source of entertainment.

Fortunately, Disney Plus is here to assist. Not only are a ton of movies and TV series already available, but a ton more are being added with the abundance of Disney Plus Star content, strengthening Disney+ as one of the greatest streaming services available.

Here's how to watch Disney plus on TV regardless of whether you own a Samsung, Philips, or LG smart TV, or even if you don't own a smart TV at all. 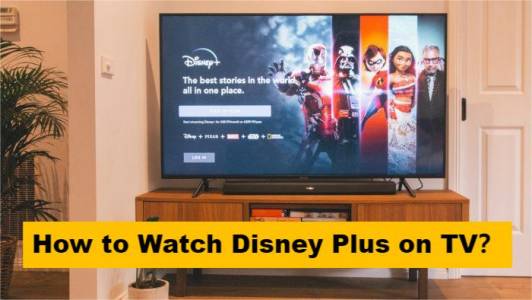 Part 1: How to Get Disney Plus on TV?

You're a super genius if you've already made a purchase of a new smart TV and are looking to move ahead. Disney+ is incredibly simple to use on smart TVs. Just access the app from the app store on your TV, log in, and you're ready to go.

The only main requirement to get Disney Plus is that your smart TV should be functioning properly and must be acquired with the latest software in this way you will be able to enjoy the highest picture quality.

Considering I don't own a smart TV, how can I get Disney Plus?

With a Fire TV stick, Roku Device or Chromecast Disney Plus is still accessible. This tiny gadget fits into the back of your television set and connects it to the internet. Each stick includes simple-to-use software that enables you to download a variety of streaming service apps, including Disney Plus, Netflix, and, of course, BBC iPlayer.

As the online retailer frequently lowers the price of its own products, it might also be worthwhile to go through the most recent bargains. Nearly all of these gadgets have an app store that you may use to look for and download the Disney+ app. Either use the app to register for a Disney+ account.

Here are the three basic ways to watch Disney plus on TV:

The Amazon Fire TV Stick is fairly similar to the Google Chromecast. It's an HDMI adapter that lets you wirelessly stream media from your phone or tablet to your TV. However, it also lets you add applications like Disney Plus, so you can watch shows and movies without needing your phone or tablet. Additionally, you can use a Roku to watch Disney+ on TV. Since its release, Disney Plus has been accessible via the majority of Roku devices, including the Roku Streaming Stick+, Roku Ultra, and Roku Premiere. However, Disney Plus is not co

Disney plus streaming on Roku is simple to install. Here is a detailed guide for you to follow: 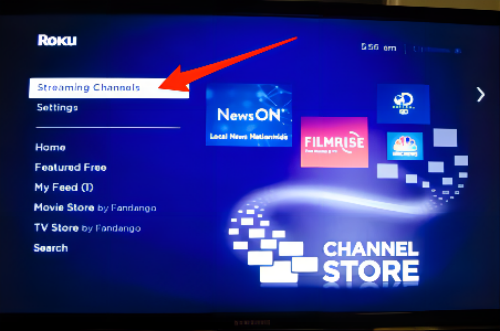 If you are unable to stream Disney+ to your smart TV via the Disney+ app, you may use Chromecast instead. Because it doesn't require a wire to connect your Chromecast and some smart TVs, this feature is both easy and simple to use. Here's how to stream Disney plus to TV: 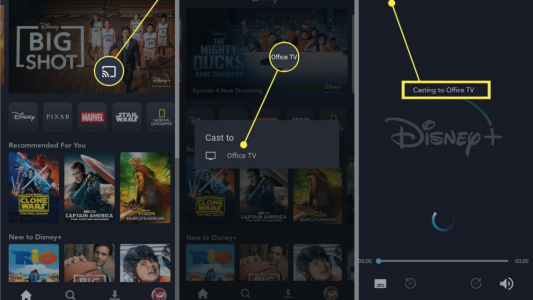 Part 2: How to Play Disney Plus on TV Wirelessly from Mac?

The quickest and easiest option for macOS users to start enjoying their favorite entertainment on a Smart TV is by using a screen mirroring program like AirDroid Cast. Using the Chrome or Firefox web browser, you may wirelessly stream Disney Plus free from your Mac, MacBook, or MacBook Pro to your TV.

The process of wireless screencasting from Mac to the TV may begin once you've downloaded the app on your phone and launched the AirDroid Cast web on your TV.

How to Watch Disney Plus on TV from Mac with AirDroid Cast?

Using AirDroid cast you can easily watch your favorite Disney plus moves from your Mac on your TV. Let’s take a look at the step-by-step process of how to set up Disney plus on TV:

It's likely that the content of your device's screen will now be displayed on your TV after you've completed the preceding steps. After a successful connection is made, the relevant icons for each feature will immediately become active. Enjoy your streaming! 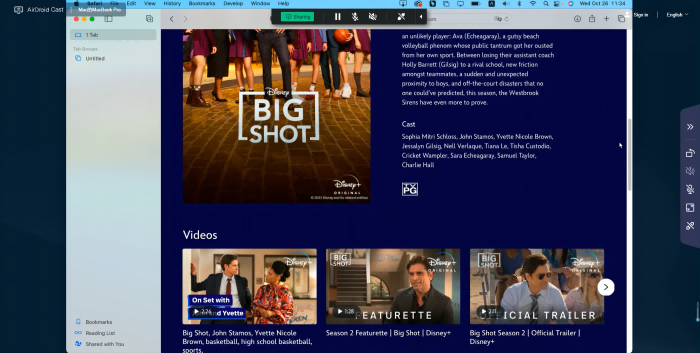 Note : Free trials require that both devices be connected to the same local network. Screen mirroring through a remote network in a web browser is a premium feature.

For All the methods that we discussed in this article, only the AirDroid Cast is the most effective and easy-to-use method. Here are some of the pros of using AirDroid Cast:

Everyone’s on a hunt for new movies on Disney+. Now that Disney's own streaming service, Disney+, is ready, you may be overwhelmed by the huge quantity of accessible material. Disney Plus started with hundreds of movies and thousands of TV episodes from Disney's library and Disney Plus-exclusive content.

Here are some of the best new movies on Disney plus in 2023:

The Disney+ app will only function properly on Samsung Smart TVs that were manufactured after 2016 and are capable of playing high-definition content.

If the Disney+ app is not supported on your television, you may access it on a variety of other devices, including video game consoles, which are also compatible with the service.M

Why Can’t I Get Disney Plus on my TV?

Geo-restriction can be a reason that you can’t get Disney Plus on your TV. Disney runs a number of tests, including checks for IP, DNS, and WebRTC leaks, to ensure that its customers are not able to access geo-restricted content.

Premium VPN services, such as ExpressVPN, should perform adequately in these tests. However, there are situations when a VPN has too many users connecting to the same servers.

Disney Plus works with practically every form of casting and streaming device. In other words, whether you own an Amazon Fire TV, Apple TV, or Roku streaming device, you should be able to stream the content directly to your TV.

Using Apple AirPlay, you may also mirror the screen from your iOS device. Also, whether you're using a Chrome browser or an Android or iOS smartphone, you can cast Disney Plus to your TV using Chromecast.