[Newest] How to Mirror iPhone to Mac/MacBook?

The connectivity is a great asset of the iPhone that makes iOS devices distinct from the rest. Apple allows its users to screen-cast their iOS devices to each other and mirror their iPhone to their Mac computer.

The latest versions of Apple with iOS 15 have made screen mirroring simple and intuitive. In just a few simple steps, the users can connect their iPhones to Mac computers and share content on both these devices. Given below are 4 easy methods to mirror iPhone to Mac and display content simultaneously.

Part 1 : Check Requirements and Set Up Continuity to Connect iPhone and Mac However, not every iOS device does support AirPlay. Hence, you need to check system requirements for continuity for screen mirroring iPhone to MacBook via AirPlay. You can share a screen if you have an iPhone with iOS 14 or later along with a MacBook with macOS Monterey or later. Given below are different types of iPhones, iPad, and MacBooks that support the screen mirroring feature:

In 2021, Apple introduced macOS monetary. Basically, it is an Apple Inc. made operating system for iOS devices that helps to use AirPlay on Mac devices without installing any third-party application.

But this inbuilt system is available on only the Mac mini 2020 or later and Mac 2019 models. Additionally for screen mirroring, you should have iPhone 7 or later because it doesn't work on the old models of iPhone. With the help of these inbuilt systems, you can easily share photos, videos, audio, etc., in a short time.

How to Mirror an iPhone to a Mac via AirPlay?

If your devices are compatible with the macOS monetary, then it's easy for you to mirror your iPhone to Mac without taking help from other third-party applications.

Here are easy steps for you to mirror your iPhone to Mac. QuickTime player is an easy method to screen mirror iPhone to MacBook. This versatile app is pre-installed on every Mac and allows users to play their favorite movies on Mac, record screen videos, and convert audio and video files quite easily. Now, to do all these, you will absolutely need a USB cable. AirDroid Cast is a user-friendly wireless tool to screencast a smartphone to a computer. The application works on multiple platforms including Android, iOS, Windows, and Mac. It is one of the easiest ways to AirPlay the iPhone to MacBook without bringing the two devices closed to each other or installing receiver. It allows you to mirror iPhone to MacBook Wirelssly/via AirPlay or USB cable. 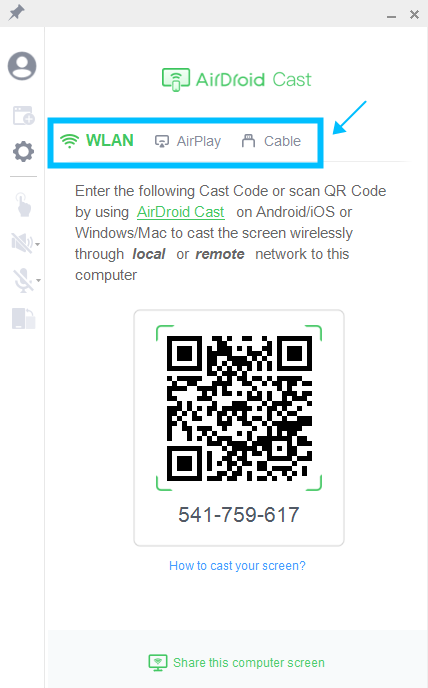 Part 5 : Cast from iPhone to Mac with ApowerMirror (Wi-Fi Needed) Steps to mirror iPhone to MacBook with ApowerMirror:

Reflector is a cross-platform, multi-functional, and easy-to-use screen mirroring app to wirelessly share iPhone screens with other devices. Reflector can receive screen mirroring connections from Google Cast, Miracast, and AirPlay. You can even deny connection to authorized users with ease. Steps to cast iPhone to MacBook with Reflector:

Although all screen mirroring apps are highly efficient, they have different features and have their own strengths and weaknesses. Given below is a detailed comparison of QuickTime, AirDroid Cast, ApowerMirror, and Reflector:

Based on the above comparison of different screen mirroring apps’ features, pros & cons, pricing, and user rating, it can be concluded that AirDroid Cast and Reflector are the best in terms of functionality and pricing. These apps offer security feature that is exclusive and supported by a few apps only.

Both wireless and cable methods can be used to mirror iPhone to Mac. The four most commonly used screen mirroring apps are QuickTime Player, AirDroid Cast, ApowerMirror, and Reflector.
Among them, AirDroid Cast is the best app in terms of functionality, pricing, and usability. Try it for free and start to mirror your iPhone to your MacBook now!

FAQs about Mirror iPhone to Mac

How to use Apple AirPlay to mirror your iPhone to Mac?

Elsa
Follow these simple tips to mirror iPhone to Mac using AirPlay:
How do I turn on/off screen mirroring on Mac?

Elsa
Simply open the Control Center in your iPhone and tap Screen Mirroring to start screencasting on Mac. To turn it off, press the Stop Mirroring button.
Why is my screen sharing not working on Mac?

Elsa
Try the following 7 troubleshootings if screen sharing is now working on your Mac:
Can you AirPlay from MacBook to iMac?

Elsa
The answer is yes, you can go to the Apple menu > System Preferences, then click Sharing, select Screen Sharing, then note the name and address of the Mac. Key in your username and password for the MacBook, and you will be connected.
Was This Page Helpful?