[100% Work] How to Cast Computer Screen to Other Devices?

Sharing the screen of your device with others on a big screen is called casting. No one wishes to watch 1080p Full HD video on the 15.6” laptop computer display screen when they have their 49” clever TV display proper in front of them.

How to cast computer? Don’t worry! Casting media from your Windows 10 laptop computer or Mac is less complicated than you think. Let’s discuss in the following.

Part 1. How to Cast a Computer to TV?

How to Cast Your Windows PC to TV with ChromeCast?

If you're searching for a tutorial on how to cast from Windows PC to the TV through ChromeCast, you've come to the right place; simply follow the instructions below to know how to use Google ChromeCast to reflect your Windows 10 display to your TV.

On your PC Windows 10 cast to iPhone or TV, download and launch the Chrome Browser. Ensure that the TV and Windows 10 Personal computer are both connected to the same Wi-Fi connection. 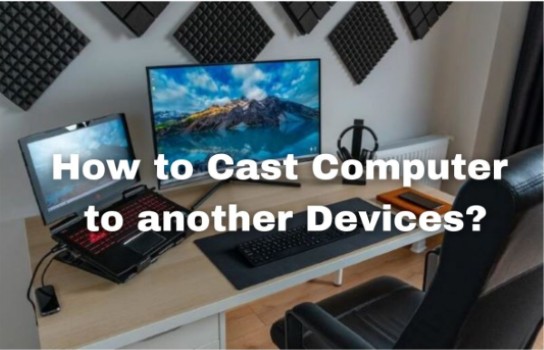 To cast your Windows PC to TV with ChromeCast using Windows 11, follow the simple steps detailed below:

How to Cast Macbook Screen to Apple TV?

You may mirror your Mac's whole display to your TV or utilize our TV as a separate display using Apple TV or perhaps a compatible smart TV.

Part 2. How to Screencast from Mac to PC?

People using Mac sometimes want to mirror their screen to a PC with a relatively larger display as, watching movies and giving a presentation on a small screen is quite a tough job to display what you want to share.

There are software and tools available that helps you screencast from Mac to PC. One of the best applications that prove to be perfect for AirDroid Cast.

Just need to install the AirDroid Cast on both the devices between which you want to share your screen. AirDroid Cast supports several connection methods.

Connect them under the same Wi-Fi to connect the devices and then you will be enabled to share the screen from Mac to PC.

How to Mirror a Mac Screen to PC using AirDroid Cast?

Step 2.Connect your Mac with PC
Open AirDroid Cast on both Mac and PC at the same time, click "Cast to" on the main interface, and enter the cast code created by the other computer below to connect and share the screen of Mac. Once connected, you can simply click on the "Clock" icon to connect to the historical computer next time. Step 3.Start Screen Mirroring
Make a connection between both the devices and start sharing your screen.

Tip: You can also choose to connect them by AirPlay. When your Mac and PC are under the same Wi-Fi, simply tap "screen mirroring" in the control center of your Mac and select AirDroid Cast.

Part 3. How to Do Computer Cast to iPhone/Android?

Have a look at the suggested solutions below to quickly mirror a PC to an iPhone and fix the problem:

ApowerMirror is the very first tool. It's a sophisticated screen mirroring program that lets you cast your Android or iOS smartphone to another. This device can broadcast mobile material like music, photos, movies, and even games.

The app's most recent version includes a new function that allows users the solution for how to cast the iPhone to a computer or broadcast their monitor's screen to their iPhone. You may also use Android to mirror your PC screen.

Here's how to broadcast from your PC to your iPhone.

This article will help you to understand how to cast a computer screen to other devices. Such as how to cast computer to TV or other PC.

Moreover, by using AirDroid Cast you can immediately cast the displays of your Android and iOS devices to a bigger monitor and even control them from a PC. Meet your requirements for working remotely, online teaching, and entertainment.

Q1. How to Turn Your PC into a Screen Mirroring Receiver?

AirDroid Cast may assist you in achieving your goals. After installing it on your PC, you can easily screen mirror Android/iPhone/Wins/Mac to your PC.

Screen mirroring may not be the most common way for users to use their phones. However, there are several applications with such a technology. It's popular for broadcasting, virtual education, and remote meetings, according to some users.

Q2. How to Cast From an Android Device?

Casting using AirDroid Cast: a screen sharing and control solution that is both powerful and simple to use. Display Android and iOS screens on a bigger screen, or use a computer to take the full influence of these smartphones.

Q3. How to Cast iPhone to Computer?

You could use AirDroid Cast to access and manage your settings from your Android or iOS devices on a computer whether you're at work or home.

You can also use the AirDroid Cast to operate iPhones, Android phones, and iPad as long as it is downloaded on a macOS/Windows computer.