Provide an easy way for screencasting from phone (Android/iOS), PC (Windows/Mac) to PC or any device's browser, as well as controlling Android/iOS devices on a PC.

Can I Cast an Android Phone to Samsung TV? How to Enable Screen Mirroring?

Watching a film on a massive screen is a fantastic experience everyone craves. We will review every option for cast to Samsung TV from Android so you can get the most out of your smart TV.

Using AirDroid Cast Web, you have the best choice for screen mirroring available to you. It's a robust web tool that doesn't require any additional software or hardware on the recipient's end. If you want to mirror your phone or computer screen to your Samsung TV, you can alternatively use a Chromecast or an HDMI converter. Screen mirroring is also possible using the Samsung SmartThings app. Let's take a close look at each of these approaches.

AirDroid Cast Web is a fantastic option for screen mirroring from Android to Samsung TV. It is free from downloading any app at the receiver end. It only takes a minute to connect the devices and start mirroring.

You can also use it for iOS mobile phones and to screen mirror any TV. AirDroid Cast Web only requires a device with a web browser and an internet connection for screen mirroring.

So, if your Samsung TV has a browser, you can easily cast your Android on it without a minute delay with an HD quality display and good speed.

Turn your Samsung TV on and open the browser to search webcast.airdroid.com. It is the official link to the web version of AirDroid Cast. The whole process will initiate here.

Download the app on your Android phone and install it to connect it to the Samsung TV.

You will get a code on your TV screen. Scan the code with your mobile or manually add 9-digit cast code to allow access. After successful connection, you Android screen will be shown on your Samsung TV. Why do we recommend AirDroid Cast Web?

AirDroid Cast Web supports multiple OS. It allows you to connect your Android or iOS mobile to a PC, Mac, or Smart TV without limitations. You can screen mirror between any of these devices.

Video quality is users' most crucial concern while searching for screen mirroring apps. AirDroid Cast Web provides high-quality video results when used for screen mirroring. Video speed is also good, with no distortion or delay in playing the video.

2 How to Cast an Android Phone to Samsung TV Wirelessly?

Method 1: What is the role of the SmartThings app in screen mirroring?

SmartThings app is one of the brilliant applications, and it would not be wrong to call it a hub for controlling devices at home. Its fantastic ability automatically detects the Samsung Smart TVs launched after 2016.

Follow these steps to screen mirror Android to Samsung TV using SmartThings app, keeping in mind the TV is 2016 or more.

Ensure you have connected Android and Samsung TV to the same Wi-Fi network.

Samsung mobiles already have this app installed, but if you are using any other Android mobile, you must download the app first. Open the SmartThings app, click on the Add Device option, and select your Samsung TV. Enter the passcode on your mobile app. You will get the code from the Samsung TV device. Your TV will connect to the mobile, and you can watch movies and other videos or images from your mobile device.

This app has a lot of technical issues while creating a connection. Sometimes it also faces a cursor problem that wastes many users' time as the cursor won't enable you to select any option. SmartThigns app does not ask for permission to connect to nearby devices. Customer support service is available but of no use to the issues faced by the users.

Method 2: How does the Google Home app helps cast Android to Samsung TV via Chromecast?

Chromecast is a media adapter used for screen mirroring. It is designed so beautifully by Google that using it in the office attracts viewers by its shape and features. It is so tiny that you can carry it in your pocket while on a journey. It does not require you to buy cable to connect to the TV.

Chromecast has a built-in HDMI cable that connects to the HDMI port of your Samsung TV. You can play any content on the TV from your Android mobile using Chromecast. Chromecast has no monthly or yearly subscription charges and no hidden charges too. You only have to buy the device; it is a free lifetime.

How to Cast an Android phone to Samsung TV via Chromecast?

Here are the detailed steps to cast Android to Samsung TV using Chromecast.

To screen mirror Android to Samsung TV with Chromecast, download and install the Google Home app on your Android mobile from Google Play Store. Step 2. Connect Chromecast to the TV

Use the small HDMI cable of the Chromecast device to connect it to the TV.

Step 3. Connect with the same Wi-Fi

You must connect your Android phone and Samsung TV to the same Wi-Fi connection.

From the app, select the Chromecast device to start mirroring on Samsung TV. 3 How Can I Cast Android Phone to Samsung TV without Wi-Fi?

If you are having some problems with the internet connectivity, you can also use a wired medium for casting to Samsung Smart TV. You can also screen mirror using an HDMI adapter.

Use a USB C-port adapter for connecting if you have the older version, then using a third-party adapter is the best solution, but you may have to compromise on the quality.

Step 1. Connect the Cable to the Adaptor

Connect your USB cable with the HDMI adapter to create a connection.

Step 2. Connect the cable to a TV

Connect the other end of the HDMI cable to the Samsung TV. You must find a port at the back of the TV. Now, connect the HDMI adaptor to the USB port of the device.

Open the source tab on your TV and select the HDMI port to which you have connected the USB cable for creating a connection. 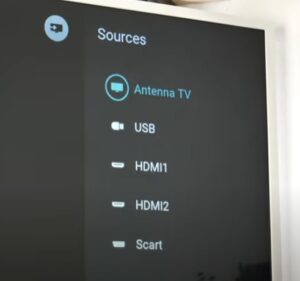 Is Wi-Fi direct helpful in screen mirroring Samsung phones to Samsung TVs?
It is beneficial in screen mirroring from Samsung mobile to Samsung TV. Please turn on the screen mirroring on your TV, which is different for different models. From your phone, open Quick Settings and choose Screen Mirroring. From the available list, connect to the desired TV. Also, add the pin to your phone shown on the TV screen.
What is the Tap View function?
It is a new feature introduced in 2020. You have to manage the Settings in advance. Open the SmartThings App on your phone and then select the Menu icon. Open Settings and click on tap view. Make sure both the devices are near each other and then allow through the notification to access the devices for screen mirroring.
Can I screen mirror Android to Apple TV?
Yes, screen mirroring is possible from Android to Apple TV using AirDroid Cast Web. You can also use various other methods like AirPlay and AirPlay 2.

5 How to Overcome Screen Mirroring Issues on Samsung TVs?

Screen mirroring from Android to Samsung TV may face some issues in connecting. Here are some commonly found issues with the devices and their solutions:

6 Extra Tips – How to Mirror Android to PC or Mac?

Several different third-party programs make screen mirroring between Android and PC a breeze. AirDroid Cast is ideal for this task. It comes highly recommended because it can project up to five separate Windows onto a single screen. AirDroid Cast allows you to manage your phone from a computer, whether a Mac or Windows PC, and its screen mirroring feature produces a clear, high-definition image.

This program has wide-ranging practical applications; you can use it anywhere, from the comfort of your home to the confines of your job. Screen casting with AirDroid Cast is possible through a USB cable, remote control, or a home Wi-Fi network on multiple operating systems.

We've explored the best apps for casting from Android to Samsung TV in this piece. Screen casting from one device to another does not come without challenges, such as compatibility issues and the need to adjust the TV's settings to allow screen mirroring.

Consider these points while you buy a new TV: You may consider several alternatives to televisions that lack the capability of screen mirroring.To avoid downloading anything to your TV, we advise using AirDroid Cast Web, a super-fast and robust web application.Any modern web browser will be sufficient for screen casting.