A Detailed Guide to Cast Your Android To Your LG

Mirroring Android on your and watching your favourite movies on a big screen is one of the most refined feelings you'll ever have. In the modern era, where everything seems to be progressing significantly - sharing your android phone's Screen with your television or more commonly known as Screencasting or is one of the emerging trends.

Since LG is among the world's top Smart brands, the chances of having LG in every home are millions. We are here with a profound guide to tell you about the process of casting an android with an LG . 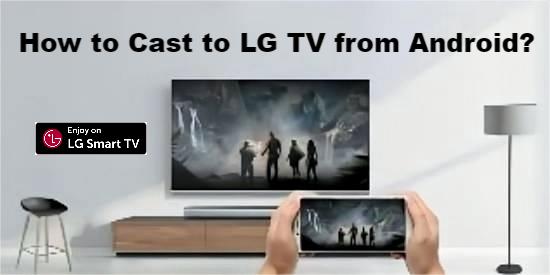 13 Optimal Ways to Cast Android to A LG

As trouting it may sound, casting your Android with an LG is not a big deal. All you have to do is to have a piece of viable information by your side - and casting won't be an issue for you anymore.

These are the three optimal ways you can cast an Android to an LG - Choose one, and it will surely do the job for you.

The profound LG smart screen share android feature comes in handy to stream your smartphone, tablet, and computer's Screen with your screen. It uses wifi Direct to stream content from your devices while maintaining 1080p quality wirelessly.

With LG SmartShare screen sharing, you can share your phone's display and photos and watch movies. However, LG SmartShare Screen Sharing only works on Android devices and Windows PCs.

Unfortunately, Apple does not support this technology. - Therefore, if you are an iPhone or iPad user, SmartShare screen sharing may not work well for you. But you don't have to worry about it, as Airdroid Cast can significantly help you as it quickly casts Apple devices on your LG !

Here we present you with viable steps that will lead you to a successful SmartShare!

Give AirDroid Cast a try!

AirDroid Cast is a renowned free screen mirroring app that is a super simple yet powerful tool for everyone. Cast Android and iOS screens to a larger screen or use a PC to gain complete control over all these portable devices - Android Cast has surely got you covered in every regard.

Hence, if you were wondering about "how to cast to LG TV from android," here's your answer.

Step 2. Open the browser on your LG TV and go to the AirDroid Cast Web

Step 3. Connect your phone with your LG TV by scanning the OR code or inputting the cast code through your phone. Step 4. Begin by sharing your Screen! AceThinker Mirror is yet another best software that you can use to mirror your Android device to your LG TV. What counts to be the best part of this screen mirroring software is its extraordinary features, which include casting the screen while providing premium video quality and allowing the user to record the activities of their android on their LG TV.

Acethinker Mirror also supports iOS devices, and you can connect your device via a lightning cable or wireless internet connection.

Below are the easy-to-apply steps that allow you to connect your device with Acethinker Mirror and cast your screen over your LG TV.

First, download Acethinker Mirror on your Android device and PC. Once the software is downloaded, you can now install and run the software.

Step 2. Connect the phone to the computer

Find your device's "M" key to start the process and select your computer name. Then you can select "Phone Screen Mirroring," press "Start Now," and your mirroring will start. 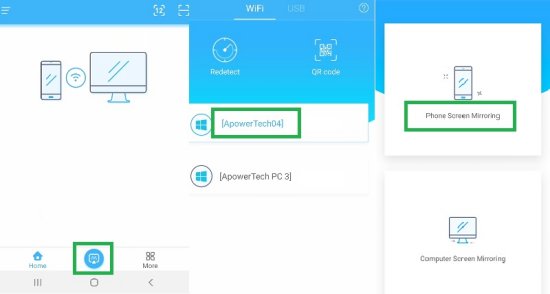 Once the mirroring process starts, you can connect your PC to your LG TV via an HDMI cable, and your Android device will be mirrored on your LG TV screen.

2Casting LG without wifi? - This is what you need to know!

Unfortunately, if you own a smart but it doesn't offer a built-in screen sharing option, it doesn't mean it can stop you from mirroring your Screen! Like every other thing, we have a hack for you that many people aren't aware of.

Want to know what that hack is?
Allow us to introduce you to Google Chrome Cast!

Chromecast is a small device introduced by Google that fits into your 's HDMI port. It would help if you usually had a wireless connection to use your Chromecast, but here are some ways to get around this:

If only you managed to implement all these steps in the proper manner, then right now, you should be starring your Screen that's cast on your - that too without a wifi connection!

3Bonus- How to Cast iPhone/iPad to LG？

Are you an iPhone or iPad user wondering about viable ways to connect your Apple device to an LG - but don't know how? Well, to your "how to cast iPhone to LG " problem - we have a perfect solution, which is none other than Airdroid Cast.

Though we have provided enough information about Airdroid Cast above, the perks this best screen caster comes with is urging us to tell you more about it.

If you can't scan the QR code on your LG , enter the transmission code on your phone. Your iPhone/iPad will connect to your LG after scanning or entering the code.

4FAQs about Casting to LG from Android

Why can't I cast to my LG Smart ?
You would need to make sure that all the devices you have comprise the same connection! Otherwise, you can try to restart your devices if LG cannot be cast.
How can I connect my Android phone to my LG without WIFI?
The simplest yet the best answer to your query is "Google Chrome Cast ."The guide above provides detailed information on how you can connect your android device to your LG without wifi!
Does LG have Screen mirroring?
Almost every LG manufactured today supports the SmartScreen Share feature. On the odds that you are someone who owns an older version, you can surely take help from the methods mentioned above to cast your Screen!
How to cast youtube to LG？

Though there are so many ways this can be done, one of the easiest ways is by seeking the help of Airdroid Cast!

Airdroid Cast is a profound and free Screensharing solution that allows you to cast Youtube to your LG ! Not only Youtube, but this smart screen-sharing software has also got you covered for playing games and reading books - in every regard!

Every Consumer electronic is striving hard to enrich their customers with a "personalized user experience" - and just like always, LG has taken a giant leap here. The already famous LG's webOS platform is now more than keen to provide its users with customizable features and convenient lifestyle services with an abundance of convenience.

Being launched in 2014, LG's webOS has continued to evolve and grow rapidly to keep up with the modern updates and trends while ensuring smooth functionality.

There's no doubt that LG users are about to witness the biggest entertainment hub in upcoming times.