How to Use AnyView Cast App to Connect Devices to Your Hisense TV?

With technology always changing, it can be hard to keep up with the latest trends. Even more frustrating is when you buy a new piece of technology and don't know how to use it. Don't fret. AnyView Cast app is a simple and easy-to-use application designed to help users connect their devices to their smart TV in just a few steps.

Today's technology has maxed out the full potential of what televisions can do. Not just for entertainment, it also became a tool for productivity and education. You can now use your Hisense TV as a display for your laptop, tablet, or even your smartphone. Apart from the AnyView Cast app, in this article we also introduce a better alternative App for you: Airdroid Cast to to connect your devices wirelessly to your Hisense TV 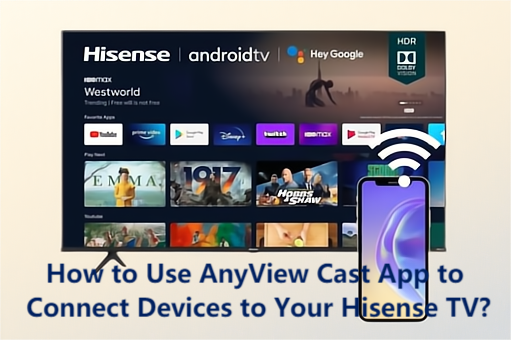 This article will mainly show you how to use the AnyView Cast app to connect your devices to your Hisense TV.

The reviews for the app are mostly positive, with Android users praising its ease of use and reliability. A few reviewers did mention that they encountered some bugs when using the app, but the developers quickly resolved them. Hisense seems to be constantly updating the app to improve its performance, yet its simplicity remains.

2How to Connect Hisense from Android with Anyview Cast?

Connecting your Android device to your Hisense TV is pretty straightforward. All you need to do is follow these steps: 3Can I Only Use Anyview Cast for Hisense TVs?

Anyview Cast has a lot of benefits that make it a great app to use when connecting your devices to your Hisense TV. First and foremost, the app is very simple to use and can be set up in just a few minutes. Second, it is free. And third, Anyview Cast is not just limited to Hisense TVs. You can use the app with any smart TV with Miracast or AllShare Cast support, including brands like Samsung, LG, Sony, and more.

However, we recommend you double-check with your TV manufacturer to ensure that it's compatible with the Anyview Cast app. The only downside of Anyview Cast is that it may be particularly difficult for apple and iPhone users. Some have complained that the app doesn't work even though they've been allowed permission to access their phone's screen. Thankfully, there are possible workarounds that you can try if you're having problems using Anyview Cast with your iPhone.

Anyview Cast is still a great app with these pros and cons, especially when connecting your Android devices to your TV.

On the other hand, there are better alternative apps that you can use if you're having trouble with Anyview Cast or if you want to connect your iPhone to your TV. Let's check them out!

If you're seeking an easy way to mirror your Android device's screen to your TV, then AirDroid Cast is the app for you.

AirDroid Cast is an app that allows you to easily mirror your Android device's screen to any smart TV. It is a cross-platform app and allows screen casting across multiple devices. Users can cast screens on any TV that can open the browser. It eliminates any issues that might arise when mirroring a screen.

How to Use AirDroid Cast to Connect Devices to Your Hisense TV? 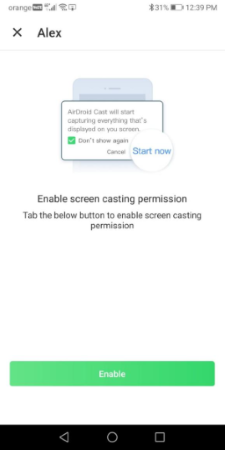 Aside from its simplicity and convenience, AirDroid Cast also has a lot of other benefits.

First, it doesn't require you to root your device. Second, it supports multi-platforms. And third, AirDroid Cast doesn't only allow screen mirroring; it has multiple features, including the ability to enjoy playing video games on a wide high-definition screen, or online streaming with your friends.

AirDroid Cast also supports up to 5 devices on one screen so that you can do many things simultaneously. Lastly, the app has two-way audio that lets you talk to people on your phone while you're casting your screen.

Overall, we think that AirDroid Cast is an excellent alternative to the Anyview Cast app. It has many features that make it very convenient and easy to use. Give it a try and see for yourself!

Tips: The app is free, but you can upgrade to AirDroid Cast Premium to enjoy all the Premium features. Such as remote casting and remote control.

5Why AirDroid Cast Considered as the Better Screen Mirroring App?

Initially, AirDroid Cast was developed as a solution for those who wanted to mirror their devices to their PC or TV. The app has since evolved and now offers a wide range of features. making it a better alternative to Anyview Cast. It has 4.7-star ratings on the App Store and 4.3-star ratings on Google Play. Users review the app as very helpful and efficient in screen mirroring. 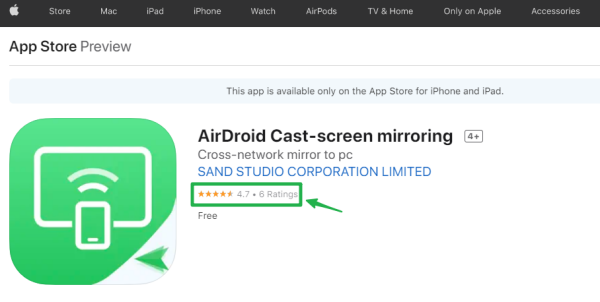 Moreover, AirDroid Cast has multiple features such as remote control & remote casting, and many more. That make it more convenient and easy to use, while Anyview Cast is mostly for screen mirroring.

Why can't I connect Hisense TV to my Android phone？
You cannot connect your Hisense TV to your Android phone for several reasons. First, ensure that both devices are connected to the same Wi-Fi network. Second, try restarting both of your devices. If that doesn't work, try resetting the network connection on your TV. And if you are still having trouble, reach out to the customer support team for your TV or your phone for help troubleshooting the issue.
Why isn't Hisense Anyview cast working？
This case may still fall under your Wi-Fi network issues. Check your connectivity and make sure your internet is stable. If your devices are still not connecting, try restarting both the TV and/or your network resource. Otherwise, we recommend reaching out to the customer support team of your TV or your router.
How can I screen mirror from iPhone to Hisense TV?
If you have an iPhone or iPad, turn the Airplay feature on, which is available in the newer model of Hisense TVs such as the R-series. Access the control center of your iPhone and tap the "Screen Mirroring" button. Select your Hisense TV from the list of devices and enter the passcode prompted on the TV. Your iPhone's screen should now be mirrored on your Hisense TV.
If you have an older Hisense TV model, AirDroid Cast Web can still enable you to screen mirror from your iPhone to your TV. You can use it to screen mirroring. You only need to install the app on your iPhone, and then input the "webcast.airdroid.com" on your TV. Next, scan the QR or enter the cast code by your device, Now your screen will be displayed on your TV screen.
How can I cast my laptop screen to my Hisense TV?
Use the built-in "Screen Mirroring" function on your Windows 10 laptop or the "AirDroid Cast" app to screen mirror your laptop to your Hisense TV.
If you want to use the screen mirroring function on Windows 10, go to "Settings" and click on "Devices." Under the "Bluetooth & other devices" section, click "Add Bluetooth or other devices." Select the "Wireless display or dock" option and select your Hisense TV from the list of available devices.
To use AirDroid Cast, download and install the app on your Windows 10 laptop. Launch the app and connect your Hisense TV to your laptop's Wi-Fi network. Click on the "Cast to" button and enter the cast code shown on your TV. Then, the screen of your laptop should now be mirrored on your Hisense TV.

Anyview Cast is a good app for screen mirroring but has limitations. If you're looking for an alternative that is more versatile and user-friendly, we recommend AirDroid Cast. It's an all-in-one solution for connecting your Android device to your TV, and it has everything you need in a screen mirroring app and more.

We hope that this article helped you screen mirror your phone to your Hisense TV. Have you used Anyview Cast or AirDroid Cast? What do you think of them? Let us know in the comments below!