AirDroid Cast can help you connect your iPhone，iPad or Mac to a TV quickly and easily. All you need to open the AirDroid Cast Web on TV and download the app on your phone. That's all!

The Definitive Guide on How to AirPlay on Vizio TV

Screens of different sizes surround us. Yet, we want some to be bigger while others should remain portable and readily accessible. When it comes to Apple devices, they are considered one of the best powerhouses that can work and play hard without breaking a sweat.

Even though they already come with a reasonable screen estate, what if we say you can mirror that screen to an even bigger one? Since your Vizio TV is already mounted to the wall, this guide will show you how to AirPlay your Apple device screen to Vizio TV in a hassle-free manner.

But before we move on to the setup, it is best to see whether your Vizio TV is AirPlay compatible or not. According to the official Vizio website, Vizio TV has native support for AirPlay 2, so you do not need to worry.

So, let us get to the guide on AirPlay on Vizio TV.

1The Preparation Phase for Screen Mirroring

Here is a list of the preliminaries that you must abide by if you want to AirPlay your favorite content to the bigger screen of your Vizio TV:

2Turning On AirPlay On Your Vizio TV

Before connecting your Apple device with your Vizio TV through AirPlay, it is necessary to turn on that option on the TV. To do that:

Step 1.To access "SmartCast Home" on your Vizio TV, hit either the V or the Home button on the remote control.

Step 2.Choose "Extras" from the menu at the top of the screen. Step 3.Ensure the AirPlay option is highlighted, and the "On" setting is selected. 3Connecting Your iPhone to Your Vizio TV Through AirPlay

Using AirPlay From An App

4Connecting Your iPad To Your Vizio TV Through AirPlay

Utilizing the screen mirroring option already built into your Vizio TV is the method that is both the quickest and the least complicated. This feature can cast images and videos from your iPad onto your Vizio TV. Simply following the steps below will teach you how to airplay content from an iPad to a Vizio Smart TV with an integrated screen mirroring feature. Vizio TV and Mac are compatible. The most recent versions of Vizio televisions come equipped with a SmartCast feature that enables you to link your television to additional devices such as a Mac or other iOS devices. Despite this, this mirrors the screen in its most basic form. This guide can stream content from your Mac to your Vizio TV. 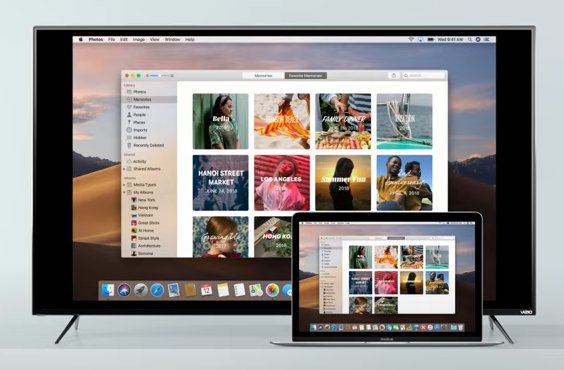 There is an excellent alternative if you do not want to go the AirPlay route to connect your Apple device to Vizio TV. It is called AirDroid Cast. It is a wireless solution that enables you to mirror the screen from Android and iOS mobile devices to Windows and Mac desktops, even when the devices are far apart (placed in different places).

AirDroid Cast allows mirroring the device's sound in addition to the screen. However, it would be best to remember that your Vizio TV must have an internet browser to go to “/https://webcast.airdroid.com/”. This is how the two devices will connect. This is where the fun begins!

As we have said in the previous section, casting your Apple device's screen on your Vizio TV is straightforward. Follow these steps to light up your room for exceptional video and audio. 7Reviews & Testimonials on the Functionality of AirDroid Cast

AirDroid Cast is loved by its users. The majority praises the company for developing an application that works across different platforms. Here are some reviews to reflect that sentiment. Many people claim that AirPlay is a godsend for them to enjoy content on the larger screens lying around their homes and offices. Since it is a built-in solution with no need to install new software, there is a lot of truth.

But AirDroid Cast is a very slick application that can do the same, if not more, when AirPlay fails to comply. So, go to the App Store and download AirDroid Cast on your device to enjoy seamless connectivity with your Vizio TV!

8FAQ about Airplay on Vizio TV

How To Airplay To Vizio TV Without Wi-Fi?

Elsa
You don't need to connect your devices to the internet to mirror your Apple device's screen to Vizio TV through AirPlay. The AirPlay on your Apple device will connect with your Vizio TV by creating a wireless network.
Do All Vizio Smart TVs Have Airplay?

How do I use AirPlay on a Vizio TV?

Before connecting your Apple device with your Vizio TV through AirPlay, it is necessary to turn on that option on the TV. To do that:

What can I do if my iPhone does not connect to my Vizio TV?

In that case, connect with Apple support if your TV has the HomeKit and AirPlay 2 features enabled, the firmware is the latest, you can see the AirPlay icon on SmartCast Home, and the AirPlay option is set to On.

If that is the case, the grass is greener on the other side, as you can check out a great alternative - AirDroid Cast. Connecting your Vizio TV with your iPhone is a hassle-free solution, especially when AirPlay fails you.

How to Disable Vizio Airplay on an iPhone?