How to Take a Screenshot on Your Huawei Phone?

1How to Screenshot on Huawei in 7 Ways?

Wondering how to take a screenshot on your Huawei phone? Here is the step-by-step guide and 7 ways to screenshot Huawei easily and capture your kid's moments.

This is the most prominent method of taking screenshots on any phone. On a Huawei, you do like this:

Step 1: You must simultaneously press the holding and volume down buttons to make a copy on a Huawei handset.

Step 2: As soon as the screenshot has been taken, a preview of it will appear in the bottom-left corner of your screen.

Step 3: You will unlock different choices to personalize, comment, or publish if you tap it.

Finally, click on the screenshot icon running away ASAP to edit it further. Or you can edit it with ease by finding it in the gallery.

2Use Your Knuckle to Take Screenshots

Not only do Huawei smartphones identify swipes made with the finger, but they also understand knuckle motions and taps. You will need to ensure that your phone is turned on to use this method, even though it may be faster than using the buttons on your phone.

So, here is you take a screenshot on Huawei using your knuckle:

Step 1: Firstly, you need to customize your screenshot setting.

Step 2: So, go to the setting and open the Smart screenshot. Use the instructions to perform a screenshot using only your knuckles. 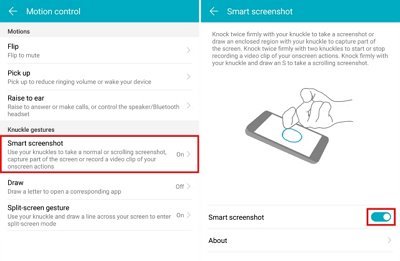 Step 3: Now, go to the screen you want to take a screenshot of, then tap the screen twice using one knuckle as quickly as you can.Also, you can initiate your screen recording by using your two knuckles. This will save the screenshot.

On Huawei smartphones, a shortcut is available in the fast settings panel that may be used to capture screenshots.

Step 1: To access the notifications and quick settings panels, slide downwards of the display in either direction.

Step 2: To take a screenshot, tap the icon that looks like a camera, named Screenshot. 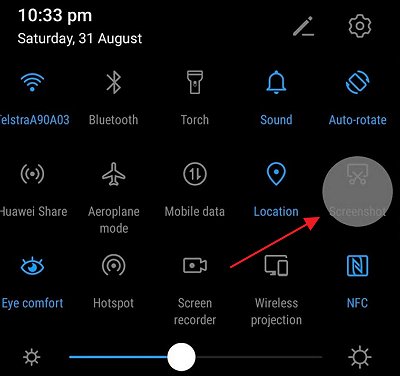 Step 3: If the symbol is not already present in the panel that displays fast settings, you must add it.

Step 4: The notifications panel and the shortcuts menu can be accessed by swiping toward the ground from the top of the display. Tap the edit function (it looks like a pen) in the top corner. Move the Screenshot icon to a group of shortcuts that are now active at the very top of the image.

When this feature is turned on for the Huawei smartphone, it lets the user quickly capture a screenshot by sliding three fingers horizontally across the screen from top to bottom.

Here is how you can turn this feature on/off: 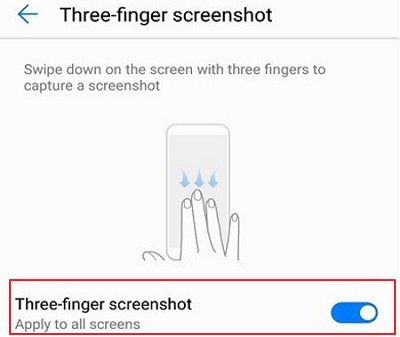 This screenshot is mainly referred to as a 'grabshot' since you are using your whole hand or palm.

Here is how you do it:

Step 1: Firstly, go to setting and turn on the button Shortcut and capture. 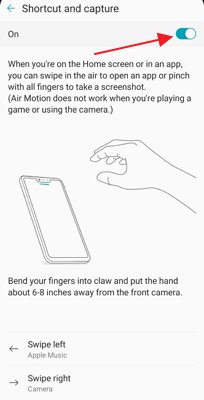 Step 2:Put your hand about a half arm's distance away from the mobile with your palms down the screen.

Step 3: Now, wait for the icon to show at the edge of the screen.

Step 4: Lastly, clench your hand to take a screenshot of the screen.

6Screenshot by A Voice Assistant

Did you know you can take screenshots on your Huawei phone using a voice assistant? It's true! You only need to say the magic words, and your phone will do the rest.

Here's how it works:

Step 1: First, go to setting and turn on the button Voice Assistant. 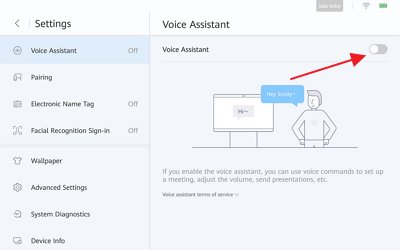 Step 2: Open the screen you want to capture.

Step 3: Then, press and maintain the power button and say, "take a screenshot."

Step 4: Your phone will take a screenshot and save it to your gallery. That's all there is to it!

So if you're ever in a situation where you need to take a screenshot quickly, don't fret - just give your Huawei phone command, and it will do the rest.

Taking a screenshot is one thing, but did you know that you can also use this feature for a great benefit, like supervising your kids? To supervise your kids 24/7, you need to use the AirDroid Parental Control app. Before moving forward, you must understand that the guys behind this excellent app aim for healthy digital habits for your kids. And who is better to supervise them than you? Here is how you can use this app:

Step 1: On your Huawei smartphone, you need to download and install the AirDroid Parental Control app.

Step 2: When you start up AirDroid Parental Control on your device, you will automatically be taken to the registration page. First, create an account for yourself, and then sign in.

Step 4: After that, you need to enter the pairing code to connect the device. You can now view the content on your kid’s screen and take a screenshot when you find something inappropriate.

2How to Take a Scrolling Screenshot?

In today's world, we are constantly bombarded with images and information. Whether scrolling through our Twitter feed or reading an article online, taking everything in at once can be challenging. Thankfully, our phones are equipped with a handy tool that allows us to capture everything on our screen in one go: the screenshot. And if you happen to have a Huawei phone, taking a screenshot is even easier than usual. 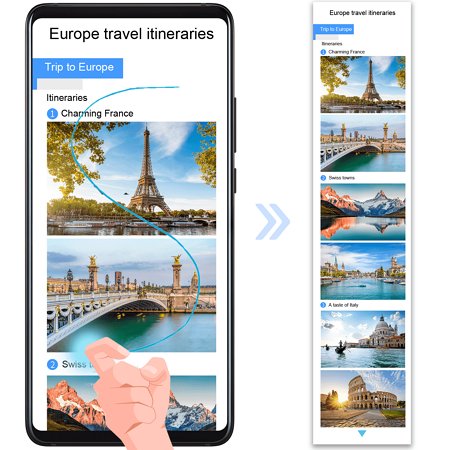 Here's how to do it:

Step 1: Open the screen you wish to capture.

Step 2: Now continuously press the display and hold it while drawing an 'S.'

Step 3: The screen will automatically move downwards, covering all the areas your wish to capture.

Step 4: Now touch the screen again to stop the auto-scrolling, and the captured screenshot will be saved in your gallery.

Step 5: Finally, you can crop the image for the additional not-needed parts.

So there you have it: a quick and easy guide to taking scrolling screenshots on Huawei phones. Now get out there and start screenshotting away!

3How to Take a Partial Screenshot?

Have you ever wanted to take a screenshot of something on your Huawei phone but only capture part of the screen? Well, it's actually pretty easy to do.

Step 1: You can draw an outline around the portion of the screen that you like to grab by tapping the display with your knuckle and holding it there for a moment.

Step 2: The path your knuckle followed during its movement will be displayed on the screen, and a snapshot will be taken of the picked area.

Step 3: To save the screenshot, touch the screen.

And that's all there is to it! Now you know how to take a partial screenshot on your Huawei phone.

Screenshots are a handy way to capture and share what's on your screen. So, a screenshot can be worth a thousand words, whether you're sharing a funny meme with a friend or requesting help from tech support. Also, if you've ever wondered how to share and edit a screenshot on a Huawei phone, wonder no more!

Here's a quick and easy guide:

Step 1: Open the Gallery app and look for the Screenshots folder to view your screenshot.

Step 2: From here, you can edit or share your screenshot as desired. And that's all there is to it!

Finally, you can take screenshots on any Huawei phone with just a few simple steps.

How Do I Double Tap My Huawei Screenshot?

Step 1: Locate the content you want to shoot on your screen.

Step 2: Then tap the screen twice using one knuckle as quickly as you can.

Step 3: You should hear a camera click sound and see a brief animation indicating that a screenshot has been taken.

Step 4: To view your screenshot, open the Gallery app and look for the "Screenshots" folder.

So try it next time you need to capture something from your screen.

How to Take a Screenshot on the Huawei P20?

Use the On/Off button. To capture a screenshot, you must press and hold down the bottom portion of the Volume key simultaneously. The photograph has been stored in the gallery of the mobile device.

How to Do a Screenshot on Huawei P Smart?

To capture a screenshot, you must simultaneously hit the bottom portion of the Volume key. The photograph has been stored in the gallery of the mobile device.

How Do You Screenshot on Huawei without a Power Button?

Navigate to the Settings menu on your device, select Motions, Gestures, and Enable Palm Swipe. In a similar vein, the "Knuckle" gesture gives you the ability to screen capture on Huawei devices.You must tap the screen twice with your knuckles to take a screenshot for all intents and purposes.

How to Screenshot on a Huawei Tablet?

While holding down the power button, press the volume down button simultaneously. If you wish to record a video instead of an image, the process is the same, except that you must simultaneously hit the on key and the volume up key.

How to Screenshot on a Huawei Nova 3i Lock Screen?

Fortunately, taking a screenshot on a Huawei Nova 3i is easy, even if the process is a bit more complicated than on other devices. Here's how to do it:

Step 1: First, go to the screen you want to take a photo off.

Step 2: Then, simultaneously press and hold power and volume down buttons.

Finally, open your Gallery app to view the screenshot. That's all there is to it! You can screenshot anything on your Huawei Nova 3i lock screen with just a few simple steps.