Take screenshots on kid’s Samsung devices and ensure their security

How to Screenshot on Samsung?[2022 Answered]

It isn't easy to find a feature on our smartphones that is more useful than the ability to snap a screenshot, whether you're attempting to store some details for future use or want to share something you discovered. It's a relief that most Android manufacturers have standardized this procedure, so understanding how to screenshot on Samsung should be simple.

Don't you trust me? I'll demonstrate how below, along with a small brief of a new magical app that can help you to monitor your kids when you are not around. So, without further ado, let's dig into it.

Part 1: How to Screenshot on Samsung in 6 Ways?

There are a lot of methods for taking screenshots on a Samsung phone, two of which are less evident than others. Below, we'll guide you through each of these approaches.

Note: Most Samsung Galaxy smartphones, including those from the Galaxy S and discontinued Note lines, as well as most current Galaxy A models from the previous four years, can be restored using these techniques. However, if your phone is more than four years old, it might only be able to take screenshots using the below-critical combination method.

On Samsung smartphones, taking a quick screenshot requires a quick move that may require some getting used to that combines the power button and the volume button. You won't ever miss it again after mastering it, though.

Step 1: Open the desired content or image you want to capture on camera or wish to screenshot.

Step 2: Smoothly press and release the power and volume down buttons simultaneously for one second.

Step 3: If you press and hold the buttons for a prolonged period, your phone will either lower the volume or initiate a long-press action with the power button. To take a screenshot, hold the buttons down for a brief period.

Step 4: The far-right button on the bottom bar that appears on the screen will allow you to share the screenshot right away. Alternatively, you can access it via the notification shade.

Step 5: Additionally, using the middle button will allow you to enter editing mode. You can then share or save the screenshot after cropping and adding drawings.

2By Swiping Your Hand

Step 2: Swipe your hand in a single motion across the screen while keeping it in contact with the device's left or right edge by placing it vertically.

Step 4: The on-screen toolbar or the notification shade can save, share, and edit the screenshot similarly.

If you can't reach your phone to utilize the buttons or palm swipe, you can use Bixby Voice to take a screenshot.

Step 2: After opening it once, Bixby Voice will automatically start when you press the button for a long time.

Step 3: Tell the interface to "Take a screenshot" when it is active. 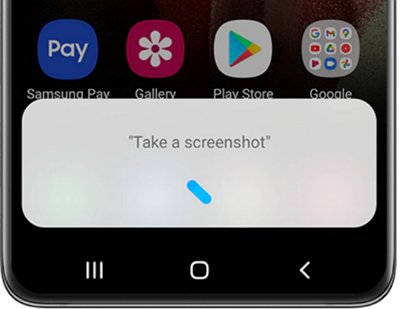 Step 4: The instant edit features of the other ways are lost while using the Bixby approach. If you need to get fancy, you can combine commands like "capture a snapshot and publish it to Twitter."

Regardless of how you begin your screenshot, you'll get a list of options at the bottom of the screen after taking it, among them "screen capture." This button, which is a box on the left with downward-pointing arrows, scrolls across the content on the screen and takes several screenshots, combined into one tall screenshot to show everything at once. This is quite helpful for taking screenshots of entire websites, detailed maps, or lengthy restaurant menus. Even though Samsung phones have had this capability for a while, Google only recently began pushing it out on Android 12. 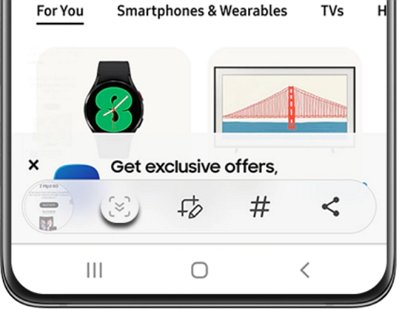 Hit the scroll capture button as many as necessary; once you reach the bottom of the screen, it will likewise automatically stop. Once finished, the snapshot can be shared, edited, or saved like any other. You may also press and hold the scrolling button to record a whole page or document quickly and painlessly.

Why not take a screenshot with your S Pen if you already use one with a phone that supports it? The Screen write function of the S Pen makes it simple to quickly take a screenshot of whatever you're doing on the phone.

Navigate to the screen you need to capture after taking your S Pen out of your phone. For example, tap Screen write after tapping the Air command menu icon with your S Pen. Your phone will automatically snap a screenshot when you are on a page. Use the controls if you want to write or draw on the snapshot. Once finished, click the Save icon to save the image to your Gallery.

With Smart Select, your S Pen may now be used to capture portions of an image selectively.

On the parent's device, all you must do is install AirDroid Parental Control.

Launch AirDroid Parental Control App on your device after download. You will redirect to a signup page. Then, create your account with proper details and log in.

You must configure certain basic settings on your phone after signing up. To sync the device, input the pairing code after that. And the screen mirroring feature is compatible with Samsung devices, making it easy to capture those special moments.

Part 2: How to View Screenshots on Samsung?

Go to the Samsung Gallery app in the app drawer of your launcher to access your saved screenshots. The primary camera roll is where screenshots are saved, but you can also access the Screenshot album under the Album menu to find all your screenshots in one location.

Bonus: How to Crop a Screenshot on Samsung Phones?

Immediately after taking a screenshot, the Screenshot toolbar also enables you to easily crop pictures. If you only want to display a portion of your screen, this is useful.

FAQs about Screenshotting on Samsung

Is It Simpler to Take a Screenshot on a Samsung Device?

Elsa
Like most Android phones work, taking a screenshot only requires pressing the Volume Down and Power keys simultaneously. Then, let them go after holding them for about a second. It's simple to take screenshots with one hand because of the button arrangement (power is on the other side of the volume button).
Are Screenshots on Samsung Notified?

Elsa
As an illustration, when taking screenshots, Samsung has added its approach to editing and sharing screenshots right away, while Android behavior is implemented through the notification window. Therefore, you probably don't need the stock Android notification if you prefer Samsung's screenshot toolbar.
Does Samsung Support Three-Finger Screenshots?

Elsa
The issue arises when pressing those buttons simultaneously is impossible due to overloaded hands. Put three fingers on your screen to create a three-finger screenshot. Your screenshot will then show up on your screen after you've completed that. It's up to you what you do with it after that.
Where Do Samsung Screenshots Get Saved?

Elsa
Android, by default, saves camera-taken images in the internal storage of your device's 'DCIM' folder, which stands for Digital Camera IMages. Screenshots are kept in a sub-folder of a different directory called "Pictures."
Can I Alter the Samsung Screenshot Buttons?

Elsa
Scroll down to "Motions and gestures" on the Advanced features screen. A switch is next to the "Palm swipe to capture" feature.
What Is the Samsung Swipe Screenshot Procedure?