Here is a step-by-step guide on how to use AirDroid Cast to screencasting from phone (Android/iOS), PC (Windows/Mac) to PC or any device's browser, and even reverse control Android/iOS devices on PC. Before you start, download AirDroid Cast for free and try it now!

With AirDroid Cast, you can easily cast your Android device's screen to your Windows/Mac computer wirelessly or by using a USB cable.

Video Tutorial: How to Screen Mirroring Android to PC (Windows or Mac included)

The following are detailed steps you can choose to follow according to your needs:

Follow the instructions below to enjoy AirDroid Cast this amazing functions for free:

Step 2 Initiate the Cast Request on the Android Device
To connect the two devices and initiate the cast request, you will need to input the Cast Code shared on the computer to your Android device. Alternatively, the QR Code also can be scanned to establish a connection between the devices. Step 4 Enable Casting Permission on the Android Device
After accepting the casting request from the computer, a casting permission page and window "AirDroid Cast will start capturing everything that's displayed on your screen" will pop up on your Android device. You can enable the casting permission by tapping the ENABLE and Start now buttons. Step 5 Casting Successfully
Once you are connected, the mirroring process will start immediately. This is how AirDroid Cast works to mirror your Android device to your computer over the same Wi-Fi network.

First, you need to be an AirDroid Cast premium user to cast your Android screen through a remote network. By following the local-connected steps above, you can easily cast Android devices to PC with the premium account.

Mirror Android Device to PC via a USB Cable

It is possible to cast the Android device screen to a computer using a USB cable if you happen to have one nearby with AirDroid Cast. Using a USB cable to mirror Android device's screen has excellent stability and isn't affected by network fluctuations. You can get a high-definition screen with no delay.

Steps to mirror Android device to PC via a USB cable to follow: 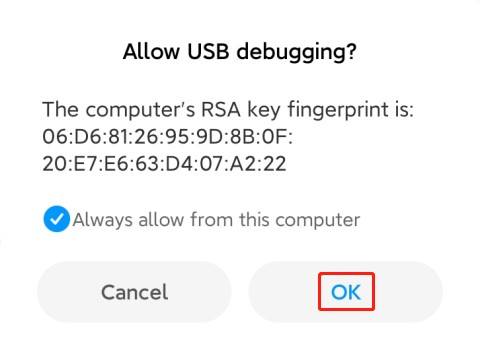 Step 4 Casting Successfully
Once the Android device is connected successfully to the computer, the device's screen will display in real-time.

If you have an iPhone/iPad, you can mirror it wirelessly or via a USB cable to a big-screen computer with AirDroid Cast pleasantly.

Video Tutorial: How to Screen Mirroring iOS to PC (Windows or Mac included)

Below you will find the detailed steps you can follow:

Here's how you can enjoy AirDroid Cast this amazing features for free:

Step 2 Initiate the Cast Request on the iOS Device
To connect the two devices and initiate the cast request, you will need to input the Cast Code shared on the computer to your iOS device. There is also the option of scanning the QR Code to create a connection between the two devices. 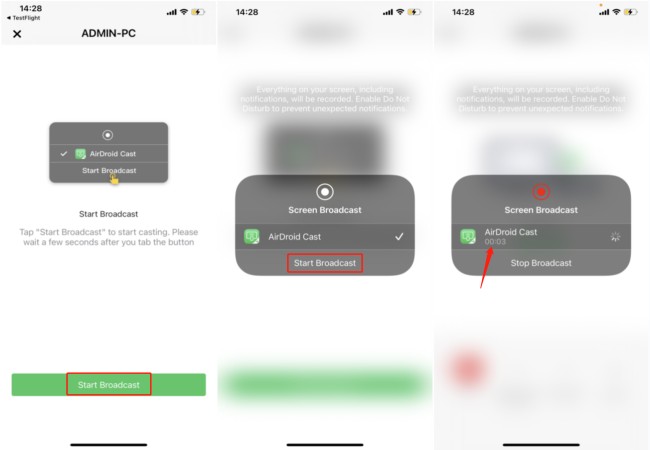 Step 5 Making a Successful Casting
If successful, the iOS device's screen will appear on the computer.

Installing AirDroid Cast on your computer will turn your computer into an AirPlay receiver easily, which means you will be able to cast the screen of your iPhone, iPad, and Mac to the computer.

Video Tutorial: How to Screen Mirror iOS to PC via AirPlay (Windows or Mac included)
Check out the detailed steps to mirror iOS Device to PC wirelessly via AirPlay below: Step 3 Casting Successfully
Once connected, the screen of your iOS device will be cast to your computer.

To cast your iOS device screen under a remote network, you should be an AirDroid Cast premium user first. With the premium account, you can easily remote casting iOS device to PC by following the local-connected steps above.

Mirror iOS Device to PC via a USB Cable

You can use a USB cable to cast the screen of your iOS device to your computer if you have one available. Cast device's screen via a USB cable has excellent connection stability and is not affected by any network fluctuations. The screen quality is high-definition, with no delay. A premium subscription is also required.

Steps to mirror iOS device to PC via a usb cable to follow:

Step 2 Cast the iOS Device's Screen via USB Cable
Connect your iOS device to your computer using a USB cable. Choose your iOS device from the Available devices list on the AirDroid Cast desktop by clicking "Cable".

Note : If you are using a Windows computer and don't install the driver of the iOS device, you will see a reminder message "A driver needs to be installed to perform screen sharing", please click " Install now" to install the driver.

Step 3 Trust the Computer
And then you will see a pop-up window "Trust This Computer" shows up on your iOS device, please tap "Trust". 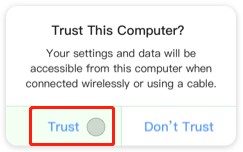 AirDroid Cast now debuted a new feature that allows you to wirelessly mirror the screen from one computer (Windows & Mac) to another, even computers are far away from each other (placed in different places).

Video Tutorial: How to Mirror PC to PC (Windows or Mac included)
Steps to mirror Windows/Mac computer to PC wirelessly through local/remote network to follow:

Step 1 Free Download and Install AirDroid Cast
Download and install the AirDroid Cast on both two computers, launch the app and sign in your AirDroid Cast account. If you are using a free trial, please make sure that your two computers are under the same local network. If you want to mirror your Windows/Mac computer to PC through remote network, please upgrade to premium.

Step 2 Initiate the Cast Request on the Casting Computer
Tap "Cast to" on the AirDroid Cast main interface. Enter 9-digit Cast Code or, click on the Clock button to connect history computers. 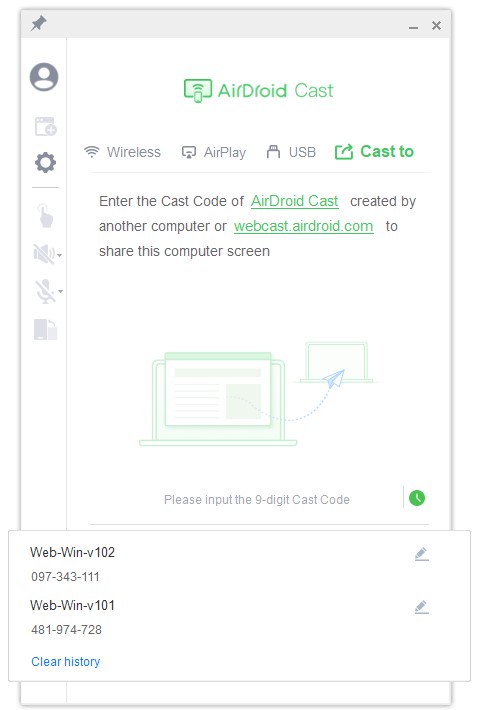 Step 4 Casting is Successful
After all the above steps are done, your computer's screen should have appeared on the another computer now. Once connected successfully, feature icons will be enabled automatically. 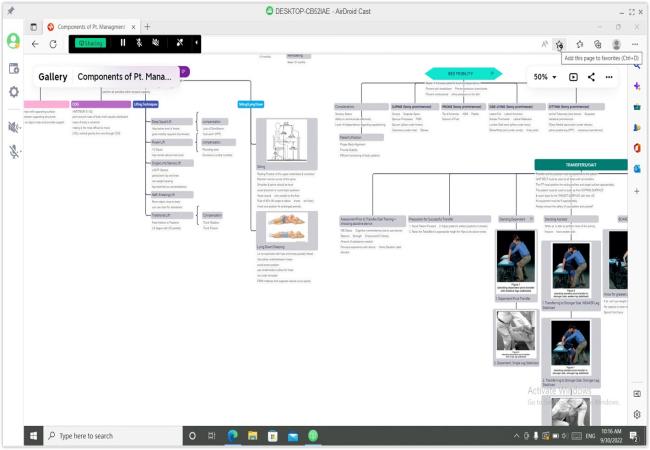 Part 4: Mirror Screens to Any Browser

AirDroid Cast Web Client (webcast.airdroid.com) allows you to instantly cast your Android/iOS/Windows/Mac screens to any web browser without any software installation for better training, presenting, everyday communication, and entertainment experience.

Steps to use AirDroid Cast Web to cast your phone and computer screens to follow:

Step 1 Scan or Input the Cast Code
Go to webcast.airdroid.com, using AirDroid Cast on your Android/iOS device or computer (Win/macOS) to enter the web casting code or scan the QR code. If you are using a free trial, please make sure that your two devices are under the same local network. If you want to mirror your screens to a web browser through remote network, please upgrade to premium.

Step 2 Accept the Request of Casting on the Browser
Accept the cast request and permission on the web browser. Simply click Allow to accept the request. When prompted, check the option “Trust this device and never ask me again” if you don’t want the request to appear every time.

Step 3 Casting is Successful
After all the above steps are done, your device's screen content should appear on the web browser now. Once connected successfully, features icons will be enabled automatically. 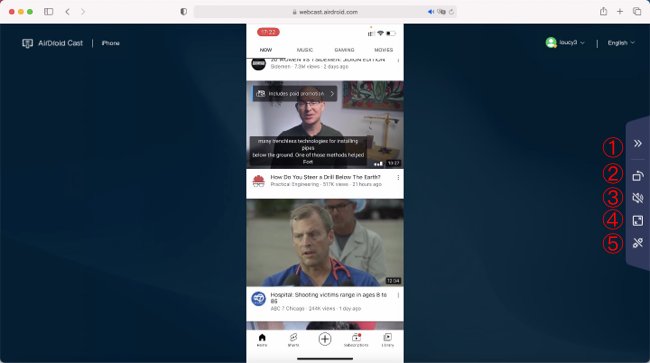 As well as the screen mirroring feature above, AirDroid Cast has many exclusive features for both entertainment and practicality. Check these details below:

AirDroid Cast also allows you to use the computer's keyboard and mouse to control the Android/iOS device from the computer which can make your life more productive and effective, let's dive in! Before you start, depending on your operating system, you can choose:

Before diving into how to control Android, please make sure the App and System Requirements below:

Steps to control Android device from computer to follow: 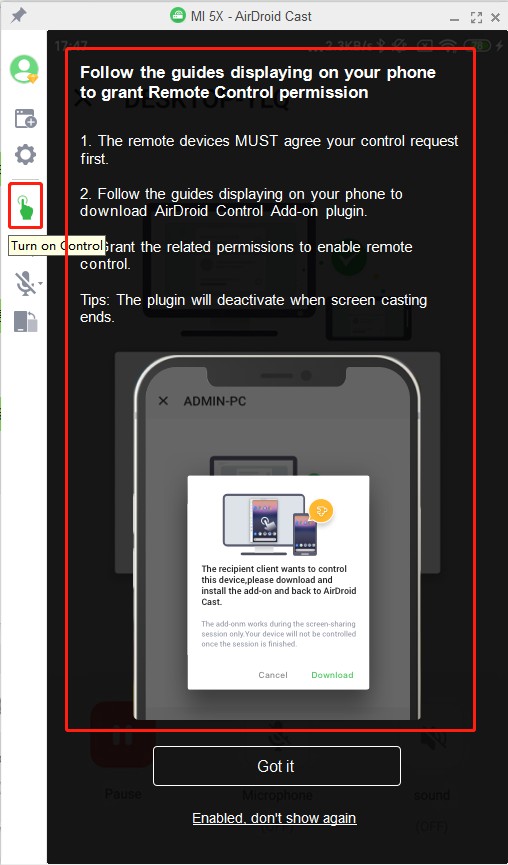 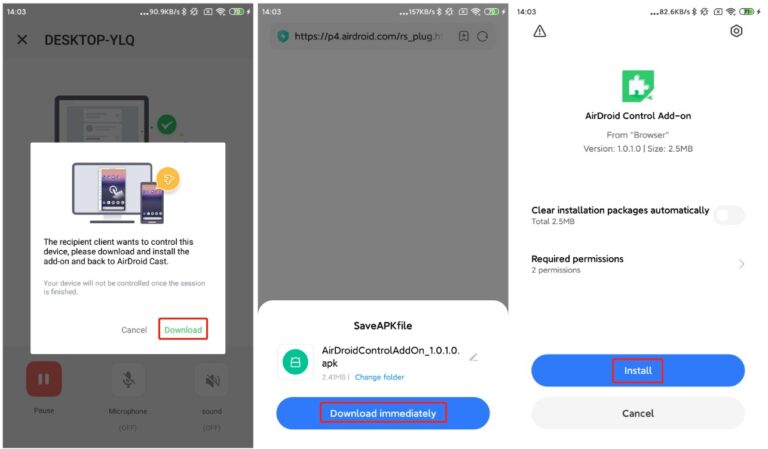 After install complete，re-open AirDroid Cast, then you will see a pop-up window appear. Just click Settings. On the Accessibility page, click More Download Service, then turn AirDroid Control Add-on on. 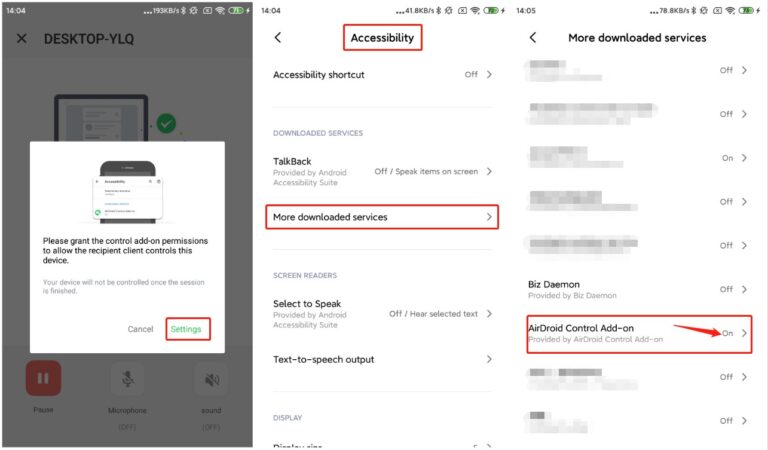 Step 3 Grant the Related Permission to Enable Remote Control
When you initiate the control request on your PC, a confirm window will display on your Android device. Tap "ok" to accept the request. Step 4 Start to Remote Control Android on Computer
After all the above steps are completed, the quick control menu will display on your computer, which means the remote control feature has been enabled succeeded. Now you can directly control your Android device on PC easily!

To control your iOS device with AirDroid Cast, you need to connect your computer and iOS device via Bluetooth, and the system version of your computer needs to meet the following requirements:

Steps to control iOS device from computer to follow:

Step 1 Initiate the Remote Control Request on the Computer
After casting the iOS screen to the computer, click the control icon on the left menu bar of AirDroid Cast on your computer.

Step 3 Start to Remote Control iOS on Computer
Once the Bluetooth pair succeed, the Bluetooth pair instruction on AirDroid Cast will disappear, and the quick control button will display on the left menu bar. To have a better experience to control your iOS device, you are highly recommended to turn on Assistive Touch and Portrait Orientation Lock. 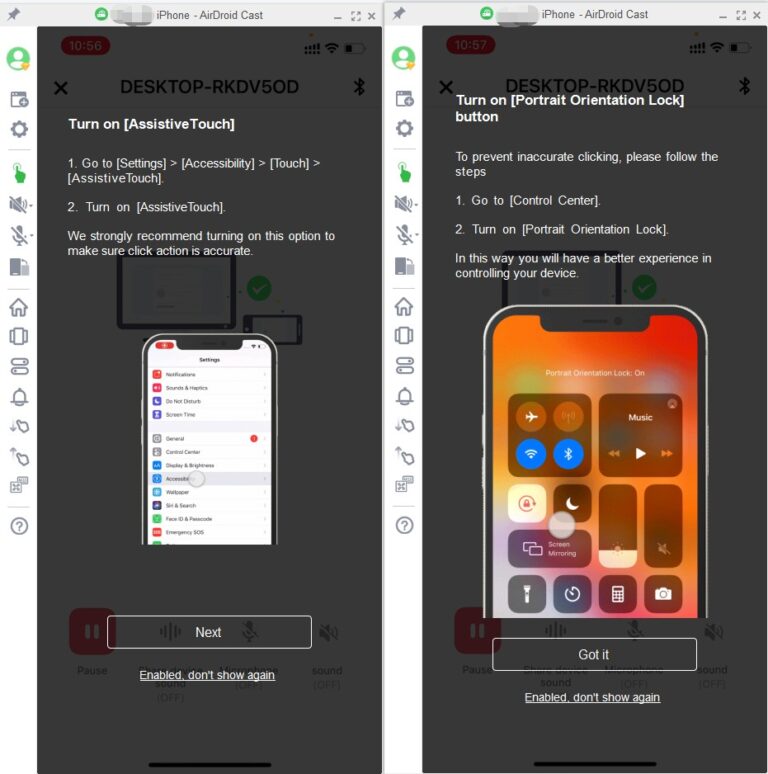 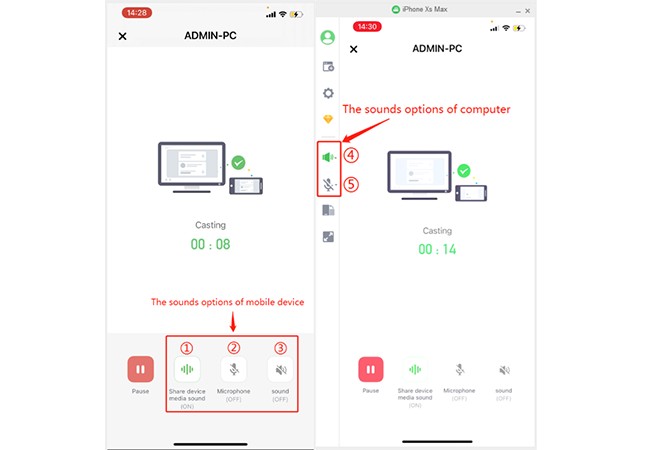 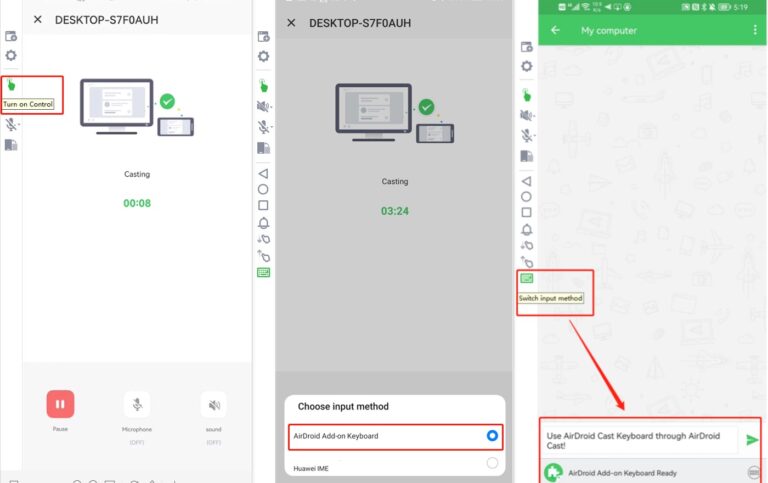 For Android users, you can one click to enter the screen-off mirroring state while you are under a USB connection. In this way, you can access and control your phone normally on the computer, but its screen will be turned off to save power and protect your privacy. Simply click the button again once you are finished with screen-off mode to turn your screen back on.

AirDroid Cast supports casting a maximum of 5 devices onto a computer simultaneously. With this in mind, you can enjoy the multiplayer gaming experience, or view all the attendees' PowerPoint slides during a meeting. Just click the "Open new window" button and enjoy multi-screens on 1 computer now. 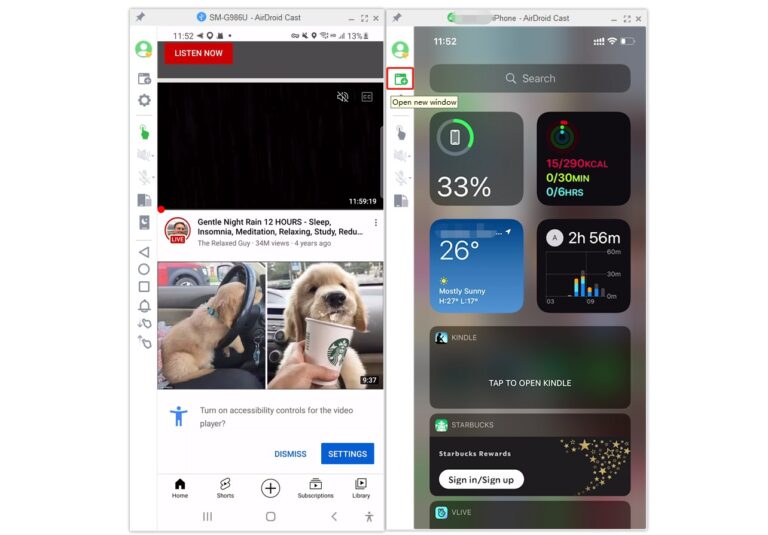 Is AirDroid Cast safe?
AirDroid Cast's remote service uses p2p (peer-to-peer) direct connection technology. The transmission is solely done between clients without going through a relay server. The transmission goes through the relay server only when the client fails to connect via the p2p channel due to network limitations. The content is encrypted using end-to-end AES encryption to ensure the safety of the transmission. Our server doesn't store any of your transmitted data and content to ensure user privacy.
Is AirDroid Cast Web free?
Yes, it is totally free when you receive screens under the same network. If you want to receive screens under remote network please upgrade your account.
Can AirDroid Cast Web control a phone?
AirDroid Cast Web doesn't support a control feature for phones. You can use the AirDroid Cast Desktop Client if you need to control a phone.
AirDroid Cast can’t be opened on macOS computer, what should I do?
Please try the following steps and check if the problem solved:
How to improve the stability of the device connection on AirDroid Cast?
To improve the stability of the connection and adjust the display quality, you can:
How many devices can I connect at a time via USB cable while using AirDroid Cast?
You can connect up to 1 Android and 1 iOS device at the same time when you use the AirDroid Cast Cable feature.
How to keep AirDroid Cast running in the background on mobile devices？
To keep AirDroid Cast running in the background on mobile devices, you can:
Failed to connect iOS devices with PC through Bluetooth while using AirDroid Cast?
If you failed to connect your iOS devices with Bluetooth, please kindly forget Bluetooth pairing both on PC and iOS, then re-pair the device.

Here is a step-by-step guide on how to use AirDroid Cast to screencasting from phone (Android/iOS), PC (Windows/Mac) to PC or any device's browser, and even reverse control Android/iOS devices on PC. Before you start, download AirDroid Cast for free and try it now!